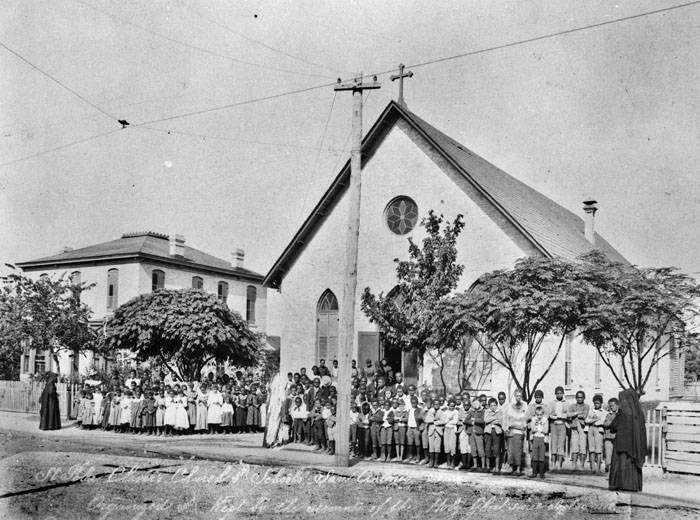 Saint Peter Claver (Mission) Church was the first African American Catholic Church in San Antonio, Texas. The church was built by Irish-born Margaret Mary Healy Murphy, the widow of John Bernard Murphy, who was the mayor of Corpus Christi from 1889 to 1884.  Margaret Mary Healy Murphy moved from Corpus Christi to San Antonio in 1887. Murphy was a devout Catholic and longtime race activist.  She was related to Daniel O’Connell, the first Catholic in centuries to have a seat in British Parliament.  O’Connell voiced opposition to slavery in Parliament in 1829, and later helped implement the Slave Emancipation Act of 1833.  His beliefs sailed with Murphy to America.

At mass one Sunday at St. Mary’s Church, Father John Maloney stressed the need for schools and churches for African Americans in San Antonio.  His directive came from the Third Plenary Council meeting in Baltimore, Maryland in 1884, which addressed concerns about the church’s rapid growth.  Archbishop John Ireland also voiced his opinion that the church needed to embrace all people, a message the bishops carried back to their diocese.  After hearing Maloney’s lengthy sermon, Murphy went to Bishop John C. (Jean Claude) Neraz and discussed the possibility of building a church and a school for black children.  With the Bishop’s favorable response, Murphy sold part of her ranch, Mount Echo, and with this $20,000, she purchased a plot of land on Nolan and Live Oak Street in San Antonio and began construction.

The completed mission had a high gabled roof which covered a pressed-brick structure with gothic windows that captured the light. At the front of the church stood a natural wood altar and in the vestibule sat an organ.  Murphy adopted the name St. Peter Claver from the 17th-century Spanish priest who taught African slaves in Lisbon, Portugal for most of his life, and who was finally canonized by Pope Leo XIII in 1888.  Bishop Neraz consecrated St. Peter Claver Mission and gave special attention to the fact that all three buildings—the church, and two free schools for 500 children—were built by Murphy. The mission provided African Americans an opportunity to create their own church community and to avoid having to view church services from the backs of other churches or their balconies.  The school was also the first institution built for Catholic African American children in Texas.

To hold services in the church, Murphy reached out to the Baltimore-based Saint Joseph Society of the Sacred Heart.  These priests ministered to African American Catholics; she built a small house for them next to the new mission.  Murphy then sought aid from several orders of sisters to help with the church and to teach at the school, but no one responded. Consequently, Murphy started the Sisters of the Holy Ghost, an order that was specifically created to minister to people of color.

The Josephites and the renamed Sisters of the Holy Spirit and Mary Immaculate maintained the operation of the church and school.  The church administers to those in the neighborhood, but the school was renamed after desegregation in the 1970s and is now called the Healy-Murphy Center and caters to at-risk teens.