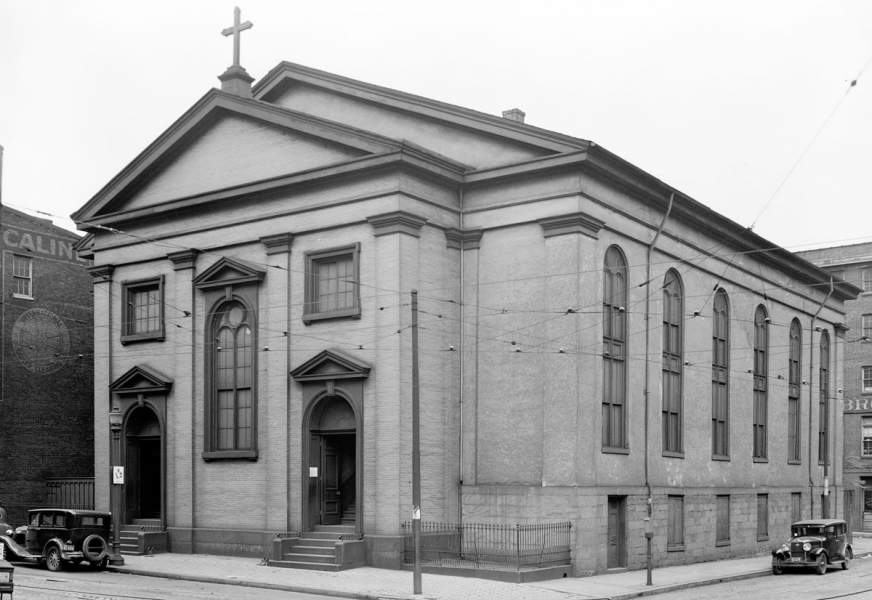 Saint Francis Xavier Catholic Church was the first African American Catholic Church in the United States.  The building, located on the corner of Calvert and Pleasant Street in Baltimore, Maryland, was originally constructed in 1836 for the congregation of the First Universalist Church.  By 1837, the church held services, but soon after the structure sustained damages from a heavy flood, and by 1839 the church filed bankruptcy.  The building was then transformed into a public place and used as an assembly hall.  It housed the 1844 Whig Convention that nominated Henry Clay for President; later the Democratic Convention held its 1848 meeting there and nominated General Cass.  The edifice also held the Maryland convention to discuss leaving the Union in 1861.  Soon after this event, the German Lutheran Church acquired the building, and it returned to being a place of worship.

On October 10, 1863, Father Michael O’Connor, S.J., who resigned as Bishop of Pittsburgh, Pennsylvania, bought the church after collecting money throughout Baltimore for an African American Catholic Church.  The majority of the black Catholics in this city hailed from the arrival of six ships in 1791 that docked at Fell’s Point and held both free and enslaved peoples who spoke French and practiced the Catholic faith.  The Sulpician Fathers—who themselves had recently arrived in Baltimore to escape the French Revolution—also spoke French, and invited these refugees to celebrate mass in the basement of St. Mary’s Seminary.  In 1857, the Jesuit Fathers of Loyola College invited this growing congregation to use the basement of St. Ignatius Church, and named it the “Chapel of Blessed Peter Claver.”  The newly-purchased St. Francis Xavier Catholic Church received some renovations, and was blessed on February 21, 1864 by Archbishop Martin J. Spalding.  It became the first Catholic Church in Baltimore (and the United States) for African Americans to worship beyond the basement or at the back of an existing church.

In 1865, Father Peter Louis Miller, S.J. started a free school for girls, taught by the Oblate Sisters of Providence, a black order of nuns that emerged in 1828.  The Sisters also started a school for boys.  The Jesuits administered to St. Xavier Parish until 1871 when the Mill Hill, England Fathers landed.  These missionary priests arrived in response to the Second Plenary Council of Baltimore meeting in 1866, which addressed the need for administering to the African American Community.  Pope Leo XIII asked the Mill Hill Fathers to work for “Negro Missions.”  In response they assumed the administration of St. Xavier Parish.  They immediately set to work and increased the number of masses, opened a home for the aged poor, started an orphanage, a night school, and a lending library.  With the support of the community, the parish grew and in 1894, the Mill Hill Fathers formed their own order, the Society of St. Joseph of the Sacred Heart of Jesus, which is known as the Josephites, and served the African American Catholic population in the United States.  They encouraged black men to join the priesthood and Father Charles Randolph Uncles, the first African American ordained priest in the United States, hailed from the Baltimore Josephites.

In 1932, the church moved to Eager and Caroline Streets and then moved again in 1968 to the corner of Caroline and Oliver Street.  The church continues to serve black Baltimore Catholics at that location today.

Baltimore American (July 10, 1877); “In 1944 Father Cassidy and Brother Mario Organized the Interracial Study Club” and “A Tribute to the Josephite Fathers” in Notre Dame Archives; http://www.josephites.org/parish/md/sfx/page2.html.