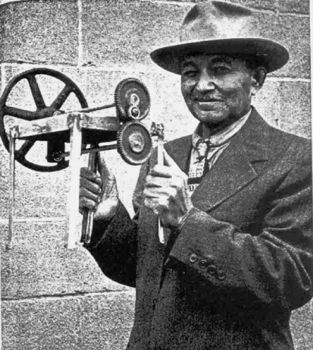 William Chester Ruth was an African American inventor, business owner, and community leader in Chester County, Pennsylvania.  Ruth was the son of Samuel and Maria Louisa Pinn-Ruth.  The 54th Massachusetts Infantry Regiment liberated Samuel, a former slave, when it occupied Savannah, Georgia in 1865 while Maria Louisa was born free in Fredericksburg, Virginia.  The couple was married in 1872 in Chester County, Pennsylvania.  Ruth was one of twelve children, born on the family farm on July 19, 1882.

As a child, Ruth had an inquisitive nature, which led him to invent numerous pieces of farm equipment and machinery.  Although he was not well educated, he learned farming and blacksmithing from his father.  Ruth married Gertrude Miller on June 6, 1906, and they had one son, Joseph.  In 1917, the couple moved to Gap, Pennsylvania where six years later he opened Ruth’s Ironworks Shop, instantly becoming the only African American in the region to have his own manufacturing business.  Ruth designed and patented numerous agricultural devices from 1924 to 1950.

Ruth’s first patented invention was the Combination Baler Feeder in 1924.  He sold over 5,000 Baler-Feeder machines across the U.S. Around the same time Ruth also invented the farm elevator used to transport hay to silos and in the American commercially harvested mushroom industry.

In 1928, Ruth invented an 87-part automatic tie for a hay baler.  Because its design was so intricate and involved, patent attorneys labeled its working mechanism a “complicated mess” and consequently it took two years before the patent office recognized his invention.  Ruth sold over 5,000 of the automatic ties to Great Plains farmers in the United States and Canada.  His next invention, the Mechanical Cinder Spreader, was used to spread cinders over icy roads.  In 1934, Ruth sold 150 of the Mechanical Cinder Spreaders to the Pennsylvania Department of Transportation.

Ruth’s fame spread and at the beginning of World War II when he was 60, he was commissioned by the United States government to design and manufacture secret wartime devices for airplanes and bombsights during World War II.  Some of his inventions were later used in the design of the Trident Missile in the 1950s.
William Chester Ruth died in an automobile accident in Lancaster County, Pennsylvania on April 3, 1971.  He was 89.