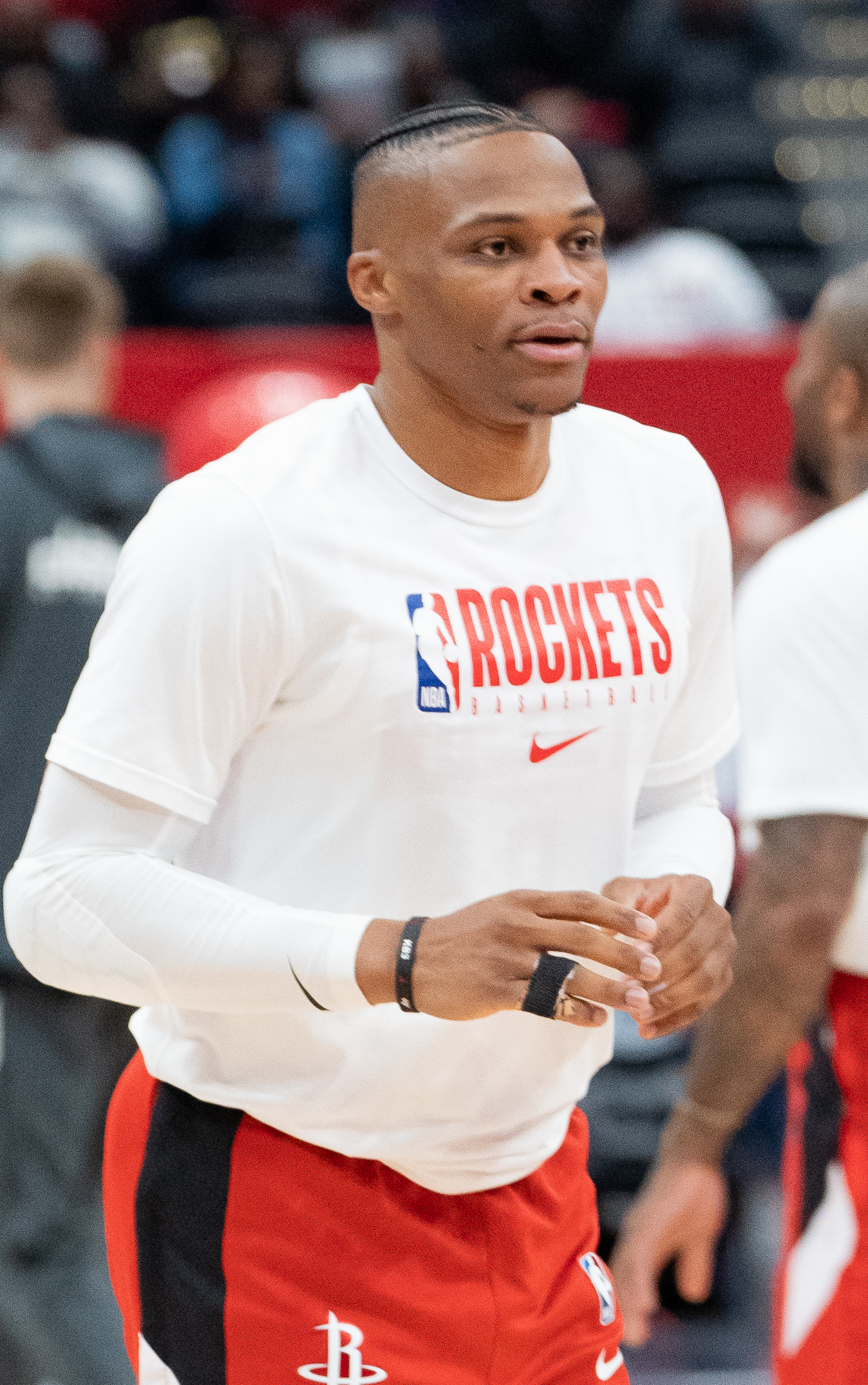 Russell Westbrook warming up with Houston Rockets before a game in Washington vs. the Wizards, October 30, 2019
Courtesy All-Pro Reels (CC BY-SA 2.0)

Russell Westbrook III is American basketball player who played for the Oklahoma City Thunder and Houston (Texas) Rockets in the National Basketball Association (NBA). Westbrook was born on November 12, 1988 to Russell Westbrook Jr. and Shannon Horton in Long Beach, California. Westbrook attended Leuzinger High School in Lawndale, California. Entering high school, Westbrook was 5ft 8in but later grew to 6ft 3in before his senior season. During his senior year, Westbrook averaged 25.1 points, 8.7 rebounds, 3.1 steals, and 2.3 assists along with helping the team to a 25-4 record. Westbrook graduated from Leuzinger High School in 2006.

After his high school graduation, Westbrook attended the University of Southern California (UCLA) where he played for the UCLA Bruins Men’s basketball team. During his freshman year, he played as back up for future NBA player Darren Collinson. Westbrook averaged 3.4 points, 0.8 rebounds, and 0.7 assists during his freshman year. During his sophomore year, Westbrook became starter where he averaged around 12.7 points, 3.9 rebounds, 4.7 assists and 1.6 steals. He was named All-Pac 10 Third Team and won the Pac-10 Defense Player of the Year. Westbrook would forgo his junior year at UCLA and entered the 2018 NBA Draft.

Selected 4th overall by the Seattle (Washington) Supersonics in the 2008 NBA Draft, Westbrook was part of the Sonics team that at the start of the 2008-2009 NBA Season, relocated to Oklahoma City where they became the Oklahoma City Thunder. During his time playing with the Thunder, he played alongside with NBA Superstars Kevin Durant and James Harden. Westbrook helped the Thunder make the 2012 NBA Finals where they lost in five games to the Miami (Florida) Heat.

In June 2020, Westbrook tested positive for COVID-19 but later recovered. During the 2019-2020 NBA season, Westbrook helped the Rockets make it to the NBA playoffs where they defeated the Thunder in seven games and then lost to the Los Angeles (California) Lakers in the finals in five games. Despite the loss and his COVID-19 diagnosis, Westbrook remains an active player as of 2020.