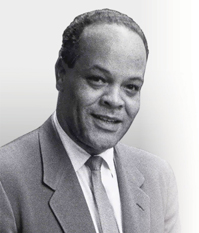 In the post-World War II years Harvey Clarence Russell Jr. paved the way for African American businessmen in corporate America. As one of the first black executives for a major American company, Russell made a name as a trailblazer and business titan in his time. He has also been influential in the early efforts to increase diversity in business.

Russell was born in Louisville, Kentucky in 1918.  His father, Harvey Clarence Russell Sr., was a college professor at Western Kentucky Industrial College, an HBCU institution that no longer exists, while his mother, Julia, was a high school teacher. Growing up, Russell was an Eagle Scout and an excellent student through his youth. He graduated with a bachelor’s degree from Kentucky State University in 1940, where he would also letter for the football team. After briefly taking graduate courses at the University of Michigan and Indiana University, Russell enlisted in the United States Coast Guard during World War II. Although he was told he could not hold an officer’s commission, Russell stood out among his peers as a great leader and as a result he was invited to the Coast Guard Academy’s Reserve Officer Training Course.  He completed the course in 1943 and became one of the first black officers in the history of the Coast Guard.

After his career in the Coast Guard, Russell returned to civilian life at first working in a Manhattan, New York advertising firm.  One of his first jobs for the firm was to market a drink called Joe Louis Punch, which was a business failure. However, Russell’s experience led him to joining Pepsi in their “Negro Sales” department. Over time, he became broadly in charge of “ethnic sales,” while performing other tasks like budgeting and speech writing. His work in sales would eventually be called “target marketing.”

Russell was promoted to vice president of domestic sales at Pepsi Cola in 1955, making him perhaps the highest-ranking African American then in corporate America. By 1962, he was the Vice President of Special Markets. That same year, Ebony Magazine recognized him as the first African American (besides Jackie Robinson, who had been vice president of Chock Full o’ Nuts) to advance himself so far through the corporate world. Despite this, Russell kept a relatively low profile throughout his career and often dismissed his own achievements as being unimpressive in comparison to black entrepreneurs.

When Pepsi merged with Frito-Lay in 1965, Russell was placed as Vice President of Community Affairs, which he would remain in until his retirement in 1983. In this position, he would associate Pepsi with many different community groups including the Brookings Institute, the Boy Scouts of America, the American Jewish Congress, and the NAACP Legal Defense Fund. He also was influential in founding the Congressional Black Caucus.

Harvey Clarence Russell,a member of Sigma Pi Phi Fraternity, passed away on February 20, 1998 in the Bronx, New York due to heart complications. He was survived by his wife and four children.  In 2003, Pepsi Co established the Global Harvey Russell Inclusion Award, which is given each year to Pepsi employees who reflect values of diversity and inclusion in their work.