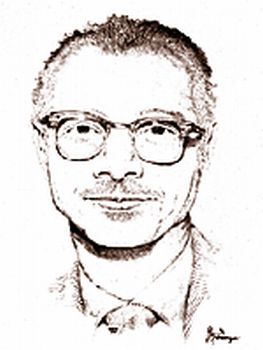 Born in Columbia, South Carolina on June 19, 1913, Edwin Roberts Russell was an African American chemist who worked on the Manhattan Project in World War II which produced the first atomic bombs and initiated the Nuclear Era.  The middle child of Nathan and Mary Russell, Edwin had one older brother, Nathan and three sisters, Henrietta, Marguerite, and Vivian.

Edwin Russell arrived at the moment the University became the center for Manhattan Project research. For the next five years (1942-1947), Russell worked as a chemist on the top secret Project at the University of Chicago’s Metallurgical Laboratory. Russell became one of the scientists directly involved in the production of atomic energy. His efforts focused on isolating plutonium from uranium, a painstakingly slow process which was necessary to build the atomic bomb. Other African American scientists who worked with Russell at the Chicago laboratory included Harold Delaney, Moddie Taylor, Jasper Brown Jeffries, and Benjamin F. Scott. Russell later obtained eleven U.S. patents including two focused on the processes of isolating plutonium from uranium (U.S. Patent 2,855,629, Oct. 7, 1958; U.S. Patent 2,992,249, July 11, 1961).

After World War II, Russell served as Chair and Professor of the Division of Science at Allen University in Columbia South Carolina from 1947 to 1953.  He then was employed as a Research Chemist at E.I. DuPont’s Savannah River Nuclear Laboratory in Aiken, South Carolina from 1953 to 1976. While working at DuPont, Russell focused on a number of projects including the treatment of radioactive waste and wrote several classified publications in the field of nuclear energy. He also served as a contributing editor to the National Nuclear Energy Series. Russell retired from the DuPont Nuclear Laboratory in 1976.

Edwin Russell was a member of the American Association for the Advancement of Science (AAAS) and the American Chemical Society (ACS). In 1974, he received an honorary doctorate from Benedict College. He married Dorothy (Nance) Russell. The couple had a daughter, Vivian Eleanor Russell Baker.