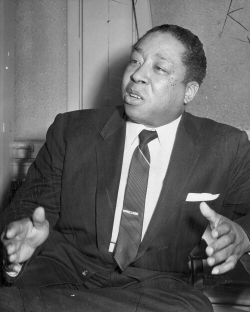 Clayton D. Russell was an important religious and political leader in the African American community in Los Angeles in the middle of the twentieth century. For much of his life Russell was associated with the People’s Independent Church of Christ, one of the largest congregations in Los Angeles. He was ordained at the church in 1929, a year after he graduated from Jefferson High School. The twenty-five-year-old Russell became the church’s pastor in 1935, following the death of the Rev. N. P. Greggs, who had founded the church in 1915.

During World War II, Russell become one of the most prominent leaders in Los Angeles’s African American community. In 1941 he organized the Negro Victory Committee, which sponsored mass meetings and demonstrations to protest discrimination against African American workers. Russell and his church, whose membership peaked at 4,000, were also the driving force behind the Victory Markets, a chain of cooperative grocery stores that served the rapidly expanding African American community during the war. In addition to leading the struggle against employment discrimination, Russell worked to elect African Americans to political offices. In 1946 he was a candidate for a seat on the Los Angeles County Board of Supervisors, and in 1959 he ran for a seat on the Los Angeles City Council.

Russell’s affiliation with People’s Independent Church ended abruptly in 1953. Russell resigned the pastorate after members of the congregation accused him of financial improprieties. Russell immediately established the Temple of Divine Guidance, later the Church of Divine Guidance, over which he presided until his death in 1981.

E. Frederick Anderson, The Development of Leadership and Organization Building in the Black Community of Los Angeles from 1900 through World War II (Saratoga, Calif.: Century Twenty One Pub., 1980).