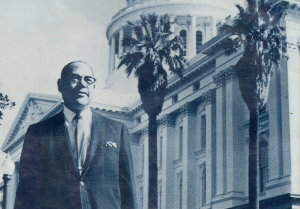 Born in Courtland, Arizona, William Byron Rumford, Sr., the younger of the two sons of a housemaid, arrived in Los Angeles, California with his mother and stepfather in 1915. His family returned to Arizona where he shined shoes, sold newspapers, and graduated from a segregated George Washington Carver High School in Phoenix in 1926. After finishing his studies at Sacramento Junior College, in 1931 he earned his pharmacy degree at the University of California at San Francisco. His marriage to Elsie Carrington in 1932 produced two sons and a daughter.

Rumford worked in the Bay Area as an assistant pharmacist and as a venereal disease investigator for the state. In 1942 he co-invested in a pharmacy in Berkeley which he later purchased and renamed Rumford’s Pharmacy. Prior to running for political office he was director of the Oakland chapter of the Red Cross, president of the East Bay Health Association, and was on the region’s Democratic Central Committee. Elected to the California State Assembly in 1948, he represented the heavily African American and Democratic constituencies of Alameda County, Berkeley, and part of Oakland. He was also an early member of the East Bay Democratic Club, an organization of African American politicians. An ally of Congressman Augustus Hawkins who preceded him in the State Assembly, Rumford served eight consecutive terms as 17th District Assemblyman until 1966. At the height of his career in the mid-1960s he was considered a possible replacement for one of the state’s ailing US senators, largely because of his ties to liberal Democratic Governor Edmund G. “Pat” Brown.

A personable, unassuming, but very effective legislator, Rumford successfully sponsored a measure in 1949 that ended segregation in the California National Guard. He also introduced legislation pertaining to fair trade and small businesses, child polio immunization, atomic energy conversion, and environmental pollution. Today Rumford is best remembered for three pieces of legislation: the California Fair Employment Practices Act of 1959; the Good Samaritan Act of 1959 which garnered national attention; and the law that bore his name, the Rumford Fair Housing Act of 1963, which failed to survive a referendum challenge (Proposition 14) but was upheld by the US Supreme Court and served as the state’s main enforcement authority against race-based housing discrimination until the passage of the Federal Civil Rights Act of 1968.

He returned to academe and acquired a bachelor’s degree in political science in 1948 and a master’s degree in public administration in 1959, both at the University of California at Berkeley. In 1966 Rumford was defeated in an attempt to win a California State Senate seat against Republican Lewis S. Sherman of Berkeley. When he was defeated in the Democratic Primary in an attempt to regain his old Assembly seat, he ceased campaigning for political office but returned to government service in 1972 when he accepted an appointment by Caspar Weinberger, then head of the Federal Trade Commission, as Assistant to the Director of Bureau of Consumer Protection in the FTC. A Mason and a Shriner, Rumford was also a member of Alpha Phi Alpha and Sigma Pi Phi Fraternities, the Commonwealth Club of California, and was a trustee of John F. Kennedy University in Martinez, California. Rumford died in Berkeley on June 12, 1986, survived by his wife and two children. A stretch of California State Route 24, a postal station at the Oakland Federal Building, and the William Byron Rumford Medical Clinic are among landmarks named in his honor.