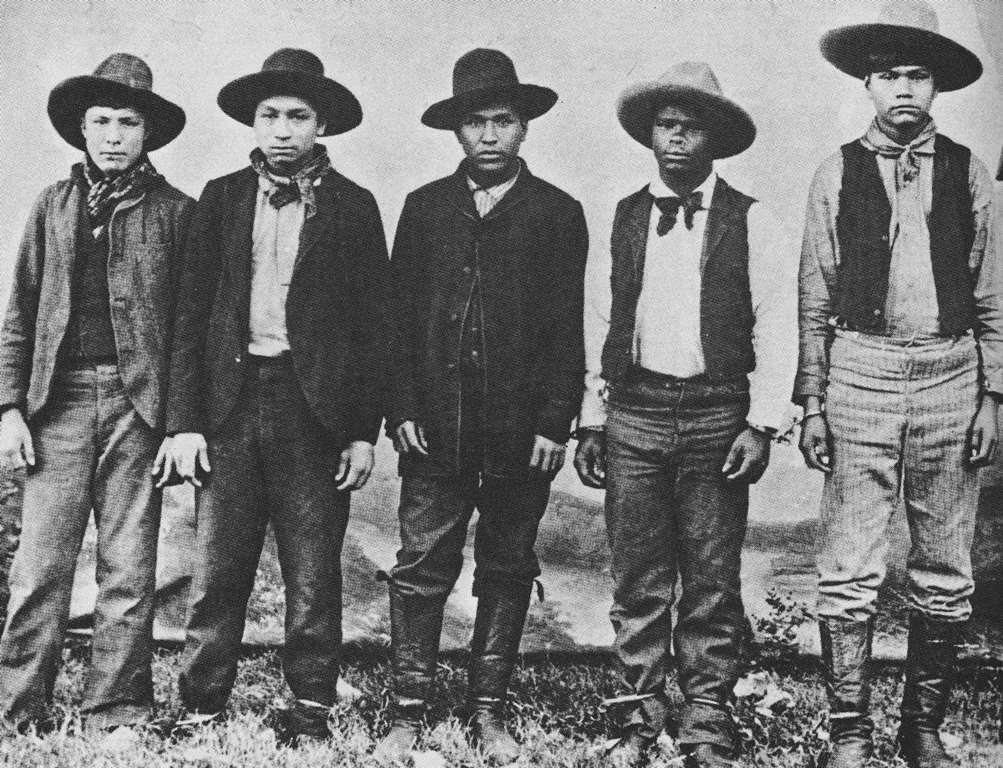 The Rufus Buck Gang was an outlaw gang whose members included African Americans, mixed-race (black and Indian), and Native American teenagers and young adults from the Creek (Muscogee) Nation. The group’s brief but horrific crime spree occurred in the Indian Territory (now Oklahoma) between July 30 and August 4, 1895. The gang was formed by Rufus Buck and consisted of Lewis Davis, Sam Sampson, Maoma July, and Lucky Davis. On July 30, 1895, the gang’s crime spree began when they robbed a Fort Smith, Arkansas grocery store. U.S deputy marshal John Garrett, one of the few African American marshals in the Indian Territory, responded to the call and was subsequently murdered by the gang.

The next day, the gang came across a white man and his daughter in a wagon. They held him at gunpoint and kidnapped and raped his daughter and who later died from her injuries. The next two weeks, the group committed other crimes including robbing several stores and ranches. The gang robbed elderly Ben Callahan but gave him a chance to escape if he could outrun them. When he did, in frustration, the gang killed his assistant, a young black boy. They also killed Gus Chambers when he resisted their theft of his horses. They robbed a stockman, taking his clothes and boots, and fired at him as he fled naked. Two days later, they gang-raped Rosetta Hansen while they held her husband at gunpoint. Hansen later died from her injuries. On August 10, 1895, the gang was finally caught by U.S. Deputy Marshals and the Creek Lighthorse police led by Deputy Marshal S. Morton Rutherford. A gunfight occurred between the gang and lawmen that lasted for one day until they surrendered.

After their surrender, the gang was almost lynched. The Creek Nation wanted to hold the gang for trial but they were taken to Fort Smith, Arkansas to face U.S. District Court Judge Issac Parker who held jurisdiction over Indian Territory.  They were tried and convicted of rape and murder and sentenced to death. The verdict, however, was appealed and execution was delayed. The appeal failed and Judge Parker re-sentenced them to death. On July 1, 1896, the five members of the gang were executed in Fort Smith, Arkansas. Rufus Buck, the gang’s leader, was 21 when he was executed. The gang’s exploits inspired Douglas C. Jones’s 1979 novel, Winding Stair, and the 2021 western film, The Harder They Fall, starring Idris Elba as Rufus Black.