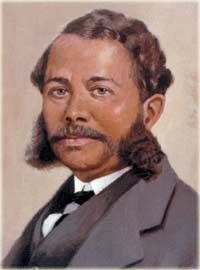 George Lewis Ruffin was born December 16, 1834 in Richmond, Virginia, the son of free blacks.  He was educated in Boston, Massachusetts and soon became a force in the city’s civic leadership.  After marrying Josephine St. Pierre, Mr. Ruffin supported his family by working as a barber.  In his spare time, Ruffin read law books and wrote reviews for a weekly publication.  Eventually Ruffin was admitted to Harvard Law School where in 1869 he became the first African American to graduate.  Later that year Ruffin was admitted to the Suffolk County Bar Association.

In 1864 Ruffin served as a delegate to the National Negro Convention in Syracuse, New York where he championed black suffrage and urged the organization to support the re-election of President Lincoln.  From 1876 to 1877 Ruffin served on the Boston Common Council (city council).  In 1883 he was appointed a judge on the Charlestown, Massachusetts Municipal Court.  Ruffin was the first African American to serve in both posts.

Along with his civic duties, Ruffin served for twelve years as an officer of the 12th Baptist Church of Boston. George Lewis Ruffin died on November 19, 1886 in Boston, Massachusetts leaving his widow, three sons and a daughter.  In his honor, the George Lewis Ruffin Society was founded at Northeastern University in 1984 to support minorities studying in the Massachusetts criminal justice system.