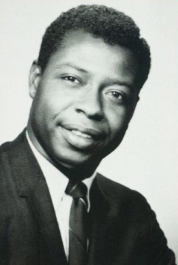 Leslie B. Rout, Jr. was a Latin American history professor, jazz musician, and author.  Rout was born into poverty in Chicago, Illinois on February 26, 1935 to a former Army master sergeant Leslie B. Rout, Sr.  His mother’s name is unknown.  Rout earned his bachelor’s and master’s degrees in history at Loyola University in Chicago and his doctorate in Latin American history at the University of Minnesota in 1966. The following year he began teaching as an assistant professor of history at Michigan State University (MSU).

Rout’s parallel career as a professional jazz musician significantly contributed to the broadening of his historical knowledge. At the invitation of the State Department, he toured Latin America with the Paul Winter Sextet, while still a graduate student at the University of Minnesota. As an accomplished saxophonist, Rout performed with the Lionel Hampton Orchestra in 1964 and the Woody Herman Orchestra in 1966. During his first year at MSU, he interviewed several legendary jazz artists including composer-pianist Muhal Richard Abrams, trumpeter-trombonist Lester Lashley, and composer-saxophonist Roscoe Mitchell for an article examining the early history of the Association for the Advancement of Creative Musicians (AACM).  The article was later published in the Journal of Popular Culture (1967). His other writings on the history and economics of jazz were published in the book Frontiers of American Culture (1968) and Negro Digest (1969.)

Eclipsing Rout’s earlier writings on jazz were his subsequent books on Latin American history.  As a result of his travels to Argentina, Brazil, Uruguay, and Bolivia, Rout published his first book, Politics of the Chaco Peace Conference: 1935-39, in 1970 which was a revision and expansion of his master’s thesis.  In 1971, he published Which Way Out? A Study of the Guyana-Venezuelan Boundary Crisis. Rout veered away from international relations to focus on the African diaspora in Central and South America with his groundbreaking 1976 book, The African Experience in Spanish America: 1502 to the Present which addressed slavery, plantation life, racial stratification, and tensions.

In 1986, Rout returned to examining international relations and diplomacy in his award-winning book, The Shadow War: German Espionage and the United States Counter-Espionage in Latin America in World War II. In the book, he became one of the first scholars to assert that FBI Director J. Edgar Hoover had possibly suppressed information pertaining to the Japanese attack on Pearl Harbor.

Rout also published in in Wilson Quarterly, International Historical Review, and Luso-Brazilian Review. He was the recipient of a Fulbright Distinguished Service Award and received grants from the Ford Foundation, American Philosophical Society, and Fulbright-Hayes. Rout was also a visiting professor at Harvard University, Northwestern University, and Oberlin College, and a Fellow at the Woodrow Wilson International Center for Scholars. Near the end of his academic career, he received a Fulbright grant to write a history of the Falklands War.

On April 2, 1987, Rout died of complications due to hepatitis.  He was 52 at the time of his death and was survived by his wife, Kathleen Kinsella Rout, a literature professor at MSU, and a son, Leslie B. Rout III. The Leslie B. Rout Jr. Scholarship for incoming freshmen at MSU honors his memory.

Mary Karasch, “Obituary of Leslie B. Rout Jr.” in The Americas (April 1988); George E. Lewis, “A Power Stronger Than Itself: The AACM and American Experimental Music” at http://www.pointofdeparture.org/PoD18/PoD18BookCooks.html; “Preserving the Legacy of Morrill Hall” at http://alumni.msu.edu/stay-informed/story.cfm?id=611.