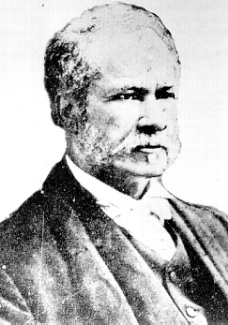 Physician and newspaper publisher, Louis Charles Roudanez was born free in June of 1823 in Saint James Parish, Louisiana. He was the son of a French merchant named Louis Roudanez and a black woman named Aimée Potens. Though his baptismal record registers him as white, Roudanez identified as a person of color throughout his life. He received his early education in New Orleans, where he also worked in a shop and invested his money in municipal bonds.

Like many “gens de coleur libre” (free people of color) in New Orleans, Roudanez went to France for higher education. At 21, Roudanez was living in Paris where he studied medicine. He completed his degree in seven years and returned to the United States in 1851. The New Orleans Tribune lists his enrollment into Dartmouth’s medical school to continue his study of medicine, but other sources list Cornell University.

After receiving his second degree, Roudanez returned to New Orleans and established his own practice. When the Union army took New Orleans in 1862 during the Civil War, Roudanez saw that the time was right to demand equality for free men of color. He started the militant Republican journal, L’Union, published in French and edited by Paul Trevigne. It was the first black newspaper to be published in Louisiana. When L’Union failed in 1864 from lack of support, Roudanez established a new journal called La Tribune de la Nouvelle Orléans (The New Orleans Tribune), which was published in English and French. La Tribune was the first bilingual black newspaper in the United States.

La Tribune and its editors asserted their right to citizenship; they demanded weekly wages for recently emancipated slaves and pushed for free public education for all. Roudanez was also an officer of the Freedman’s Aid Association, an organization that attempted to establish producer and consumer cooperatives managed by former slaves.

Despite using much of his personal fortune to keep La Tribune afloat, politics and internal conflicts caused the paper’s demise in 1870. From then on, Roudanez spent most of his time practicing medicine in his home, and less and less of his energy went into politics. He remained devoted to his wife, Celie Sauley and his children, three of whom would become doctors of medicine as well.