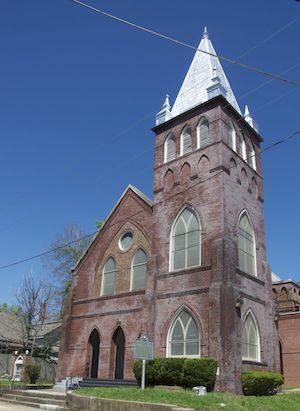 The church probably derived its name from the 12-acre Rose Hill estate that was destroyed by the Union Army during the Civil War.  The former enslaved people in the area adopted the name Rose Hill for the community in its vicinity.  By the end of the Civil War, Randle Pollard, a former slave, became the first minister of Rose Hill Baptist Church and on August 8, 1870, the church was incorporated by the Mississippi State Legislature. This recognition signaled the church’s permanent separation from Wall Street Baptist Church. Pollard soon became a member of the board of trustees at Rose Hill. Twenty-three years later in 1893, members of the Rose Hill congregation constructed a newer and more elegant building, demolishing the original 1850s style structure. According to church records, the new building featured a bell tower that was an estimated 60 feet tall.

In 1908, trouble arose. A fire caused by a gas explosion from the nearby Natchez Drug Company completely destroyed the wood frame building and many other buildings with wood shingle roofs in the northern part of the city.  With a strong commitment to rebuild their most prized spiritual, social, and political institution, parishioners built an even “grander” structure with stained-glass windows and modeled it in the late Victorian Gothic Revival style.  The choice of the Gothic Revival style reflected the wide popularity of that architecture among early 20th century African American worshippers in Mississippi. In addition, the church installed a Moller organ in 1912 that became affiliated with the Organ Historical Society.

Today, Rose Hill Missionary Baptist Church, situated in the northern suburbs of Natchez, is a state historical landmark. The church’s interior and exterior have been well-preserved throughout numerous generations. Members have also maintained the church’s original pulpit furniture, early twentieth century lighting fixtures, and varnished millwork. Rose Hill continues to be a beacon in the community.