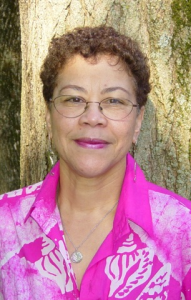 In 1959, Terborg graduated from John Adams High School and attended Queens College, City University of New York, where she first became involved in the Civil Rights Movement as a charter member of the campus NAACP chapter. While at Queens College she also protested its decision to prohibit Malcolm X from giving a speech there. She tutored black students in Prince Edward County, Virginia where schools had been closed following the 1954 Brown v. Board of Education Supreme Court decision.

Terborg earned a bachelor’s degree in history from Queens College in 1963. She then moved to Washington D.C., to attend George Washington University (GWU). In 1964 Terborg joined “D.C. Students for Civil Rights,” lobbied for the 1964 Civil Rights Act’s passage, and worked at Friendship House, a settlement house in Washington, where she met her husband William Penn. Terborg-Penn received a master’s degree in U.S. and diplomatic history from GWU in 1967, and in 1969, began working at Morgan State University in Baltimore, Maryland. Active in the local community, in 1972 she was a founding member of the Iota Lambda Omega chapter of Alpha Kappa Alpha Sorority Incorporated.

In 1975, Terborg-Penn published A Special Mission: The Story of Freedmen’s Hospital, 1862-1962. Two years later she earned a Ph.D. in African American history from Howard University. Her dissertation was titled “Afro-Americans in the Struggle for Woman Suffrage.” In 1978, she was promoted to associate professor at Morgan State University and became its coordinator of history graduate programs. She also developed the history Ph.D. program and was the director of  the Oral History Project.

Over her career Terborg-Penn published over 40 articles and seven books, most notably African American Women in the Struggle for the Vote, 1850 to 1920 in 1998. This work won the ABWH’s Letitia Woods Brown Memorial Prize. In 2003 Terborg-Penn received Towson University’s Distinguished Black Marylander award. She retired from full time teaching in 2006 and two years later she received the Association for the Study of African American Life and History’s (ASALH) Carter G. Woodson Scholar’s Medallion and Morgan State University’s Outstanding Woman Award. In 2012, she was again awarded the Letitia Woods Brown Memorial Prize for the best scholarly article about black women.