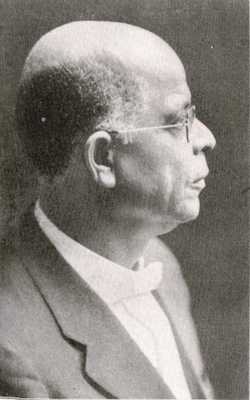 Dr. Charles Victor Roman was an author, physician, historian, medical school professor, and civil rights activist. He was also the first physician of African ancestry from North America to receive training in both ophthalmology and otolaryngology.

Roman was born on July 4, 1864, in Williamsport, Pennsylvania. His father, James William Roman, was a fugitive slave who had escaped from Maryland to Canada through the Underground Railroad before the Civil War. His mother, Anne Walker McGuinn, was the daughter of fugitive slaves who had become successful landowners and farmers in Burford, Ontario. Roman’s parents, who had lived in the U.S. during the Civil War, moved to back to Burford, Ontario in 1870 and settled on his mother’s family farm. During his Canadian childhood, a local root doctor paid Roman to collect herbs and materials from the woods prompting the boy to be intrigued with medicine.

In 1876 the Roman family moved again to Dundas, Ontario, where Roman began working for a local steel mill at the age of twelve. Roman worked from Monday to Friday for twelve hours, as well as half a day on Saturday, so there was little time for school. A local minister established a night school for the young boys working at the mill. At the age of seventeen, Roman suffered a workplace injury that resulted in the amputation of his right leg and the end of his work at the mill.

Roman enrolled in Hamilton Collegiate Institute, a local high school, and completed the four-year program in just two years. He also became the first African American to graduate from the institute. At the age of nineteen, he relocated to Trigg County, Kentucky, in 1883 to begin teaching, but by 1886, he was teaching in Columbia, Tennessee. While there, he enrolled in Meharry Medical College, graduating in 1890 with a medical degree.

A year after Roman graduated, he married Margaret Lee Vorhees of Columbia, Tennessee. The couple had no children and settled in Clarksville, Tennessee, where he first operated his private practice. The couple relocated to Dallas, Texas, where he continued in private practice from 1893 to 1904. He took a brief break in 1899 to attend the Post-Graduate Medical School of Chicago and again in 1904 to study as an ophthalmologist at the Royal Ophthalmic Hospital of London and as an otolaryngologist at the Central London Nose, Throat and Ear Hospital.

Roman returned to Meharry Medical College in 1904 as a professor of ear, nose, throat, and eye diseases after closing his practice. While working at Meharry, Roman obtained his MA in History and Philosophy from Fisk University in 1913. He published his first book, American Civilization and the Negro, in 1916. Roman was the founder and first head of the Department of Ophthalmology and Otolaryngology at Meharry, while simultaneously serving as director of health at Fisk University. He also received honorary degrees from Paul Quinn College in Waco, Texas (1904) and Wilberforce University in Ohio (1911).

Roman was the fifth president of the National Medical Association (1904–1905) and edited the organization’s Journal of the National Medical Association from 1909 to 1919. During World War I, Roman was a medical lecturer for the U.S. Army, speaking to soldiers about safe sexual practices. Additionally, he was an associate editor for the National Cyclopedia of the Colored Race (1919), a member of the Southern Sociological Congress, and the American Academy of Political and Social Science, the Knight of Pythias, and a lay leader to his local A.M.E. Church. He wrote several books and over sixty articles and pamphlets.

Dr. Charles Victor Roman died of a heart attack on August 25, 1934, in Nashville, Tennessee. He was seventy.