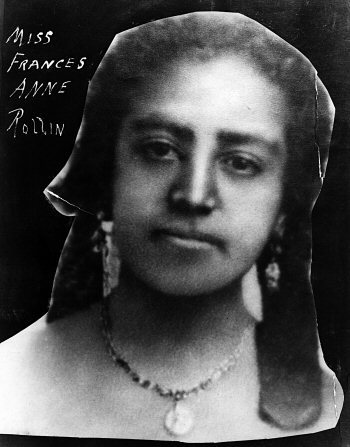 Nineteenth Century writer Frances Anne Rollin is noted as the author of Life and Public Services of Martin R. Delany which upon appearing in 1868 became the first full-length biography written by an African American. Rollin also kept a diary in 1868, making it the earliest known diary by a southern black woman.

Frances Ann Rollin was born in 1845 in Charleston, South Carolina into a free family of color originally from the island of Saint Domingue. Her father, William M. Rollin was a successful lumber merchant in Charleston. During the Civil war, Frances Rollin attended The Quaker School for Colored Youth in Philadelphia where she began her career as a writer and a proponent of civil rights and feminism.

In 1865, Rollin returned to Charleston as a teacher for the Freedmen’s Bureau. Illegally refused first class passage on the ferry to Beaufort, that year, Rollin won a lawsuit against the captain of the ferry, Pilot Boy. She was aided in her suit by Major Martin Delany, then the highest ranking black officer in the Union Army.

Delany was so impressed by the young teacher that he commissioned her to write his biography. Rollin traveled to Boston to write and to seek a publisher. Her account describes her writing experience as well as her meetings with notable abolitionists and luminaries of the Civil War era and notes Delany’s financial challenges once the Civil War ended.

Finally, in the summer of 1868 Life and Public Services of Martin R. Delany was published by Lee and Shepard, a Boston publisher. Rollin, employing the affectionate nickname used by friends and family, wrote under the pen name Frank A. Rollin.

Returning to South Carolina in 1868, Frances Rollin was employed by a Pennsylvania-born black attorney, William J. Whipper, who had been recently elected to the South Carolina Legislature. Despite family objections, Rollin and Whipper married a few months later.

Rollin continued her diary during their brief courtship and first year of marriage. The diary allowed a rare glimpse into the social life of Columbia, the South Carolina capital, and recorded the anti-black, anti-Republican violence then ongoing in the state during Reconstruction.

Marital and political difficulties took their toll on the Whippers over the next 12 years. By 1880 the dream of a Reconstructed South with equal opportunities for blacks was over and the Ku Klux Klan was on the move. Rollin separated from her husband and took her children, Ionia, Leigh, and Winifred to Washington, D.C. where old friend Frederick Douglass, Recorder of Deeds for the District of Columbia, offered her a position.

Rollin saw the children through college and lived to see Winifred become a teacher, Leigh begin his career as an actor, and Ionia attend Howard Medical School. Though separated from Whipper, Rollin continued to support the political causes they both favored. In 1892 Rollin contracted an illness while campaigning for Republican Presidential Candidate James C. Blaine from which she never recovered.