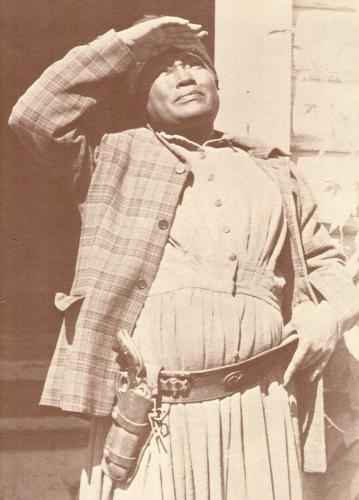 Esther Rolle was an actress primarily recognized for her role as principled, spirited Florida Evans who was first the maid on the Norman Lear sitcom Maude (starring Beatrice Arthur) and later was spun off into the starring role as the mother in the Lear sitcom Good Times (1974-79).

Despite the success of the series, Rolle clashed with the Hollywood producers because of their depiction of the oldest son, J.J. (played by Jimmie Walker) as a buffoon.  She and her co-star, John Amos, who played the father and shared her concerns, briefly quit the series.  Rolle returned during the final series to show the television family had reconciled.

Esther Rolle was born in 1920 to Bahamian immigrant parents in Pompano Beach, Florida, the tenth of 18 siblings.  After graduating from Booker T. Washington High School in Miami, she attended Spelman College in Atlanta, Georgia before moving to New York.

In the late 1950s Rolle worked in a pocketbook factory and took drama classes at George Washington Carver School in Harlem until she was awarded a scholarship to study acting at the New School for Social Research.  While there she became a member and, in 1960, the director of Shogola Aloba, a dance troupe headed by dance master Asadata Dafora.

Her early film work included Nothing But a Man (1964) and Don’t Play Us Cheap (1972). While doing the latter production, as well as her recurring role as Sadie Gray in the daytime television drama One Life to Live, producer Norman Lear asked her to audition for the role in Maude.  Rolle’s most unusual role was that of Stagecoach Mary in the 1974 Public Television Documentary series, South By Northwest.

After Good Times, Rolle played Lena onstage and on television (1989) in A Raisin in the Sun and Bernice in Member of the Wedding (1989).  The New York Times praised her portrayal of the tipsy old-guard grandmother in 1981’s The River Niger saying, “With her economy of gesture and her telling moments of silence, the actress embodies a universe of knowing, pain, and prayer.”

In television, she won an Emmy Award for Summer of my German Soldier in 1979.  She won numerous NAACP Image Awards.  She had a key role in Maya Angelou’s 1979 memoir I Know Why the Caged Bird Sings, and she was Aunt Sarah in Rosewood (1977) and Idella in Driving Miss Daisy (1989).  Rolle’s final film was Train Ride released in 2000, two years after her death.  Esther Rolle had 39 roles in film and television plus many more in theatre.

Devoted to addressing social and political injustice, Rolle delivered a much-praised reading of the proposed 52-word Equal Rights Amendment at the annual conference of the National Organization for Women (NOW) in 1981. Seven year later, again for NOW, she participated in its summer drive for a stronger black family where she addressed an audience of 90,000 people gathered on the mall in Washington, D.C.  Rolle was an honorary member of Zeta Phi Beta Sorority, an organization of college-educated African American women.

Esther Rolle died in a Los Angeles, California hospital on November 17, 1998, of complications from diabetes, just nine days after her 78th birthday.