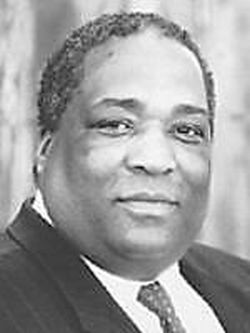 Charles Rolland was the first African American chair of a major political party in Washington State. Roland served as chair of the Washington State Democratic Party during the years 1993-1995. He won his campaign through the labor-intensive task of personally driving hundreds of miles across the state and talking face-to-face with 176 party officials who were eligible to vote in the selection process for state chair.

Rolland was born October 26, 1951, in Chicago, Illinois.  He attended Midland Lutheran College in Nebraska earning his B.A. degree in 1973.  Twenty-one years later he earned a distinguished alumni award.  Rolland arrived in Seattle in 1973 and enrolled in the University of Washington where he earned an MBA in 1974.

Rolland first started to make an impression on Washington State Democratic Party activists when he served on Rev. Jesse Jackson’s presidential campaign in 1988. Rolland was noted as helping Jackson make a marked impact on the caucuses in Washington State.

Later, because of his work with the Jackson campaign, Rolland was recruited to assist on the campaign of Norman Rice, helping him to become the first African American mayor of Seattle in 1989. Due to Rolland’s significant supporting role in his campaign, Rice appointed him as his deputy chief of staff in 1989. Rolland attempted his own career in politics, running for the office of Secretary of State in 2000. He lost during the September primary.

Rolland is also known for founding the Washington State Rainbow Coalition and leading the A. Phillip Randolph Institute in Seattle, an organization dedicated to securing economic, social, and political justice for all working Americans. He served as executive director of the Black Builders, where he identified and helped owners of small construction companies find the working capital they need to participate in public sector construction projects. He also founded the Community of Parents for Public Schools of Seattle, a community-based network of parents committed to ensuring quality public school education for all children in Seattle.

Charles Rolland died in Seattle, Washington on March 12, 2012, when he collapsed between racquetball games at the YMCA. He was 60.  He is survived by his wife Jacquelyn Moscou to whom he was married to for 34 years, his daughter Danielle Moscou-Rolland, and two sons Marcus Rolland and Sekou Rolland. All are graduates of Seattle Public Schools.  To honor his memory, Seattle Mayor Michael McGinn issued a proclamation declaring March 23, 2012 “Charles Rolland Day.”