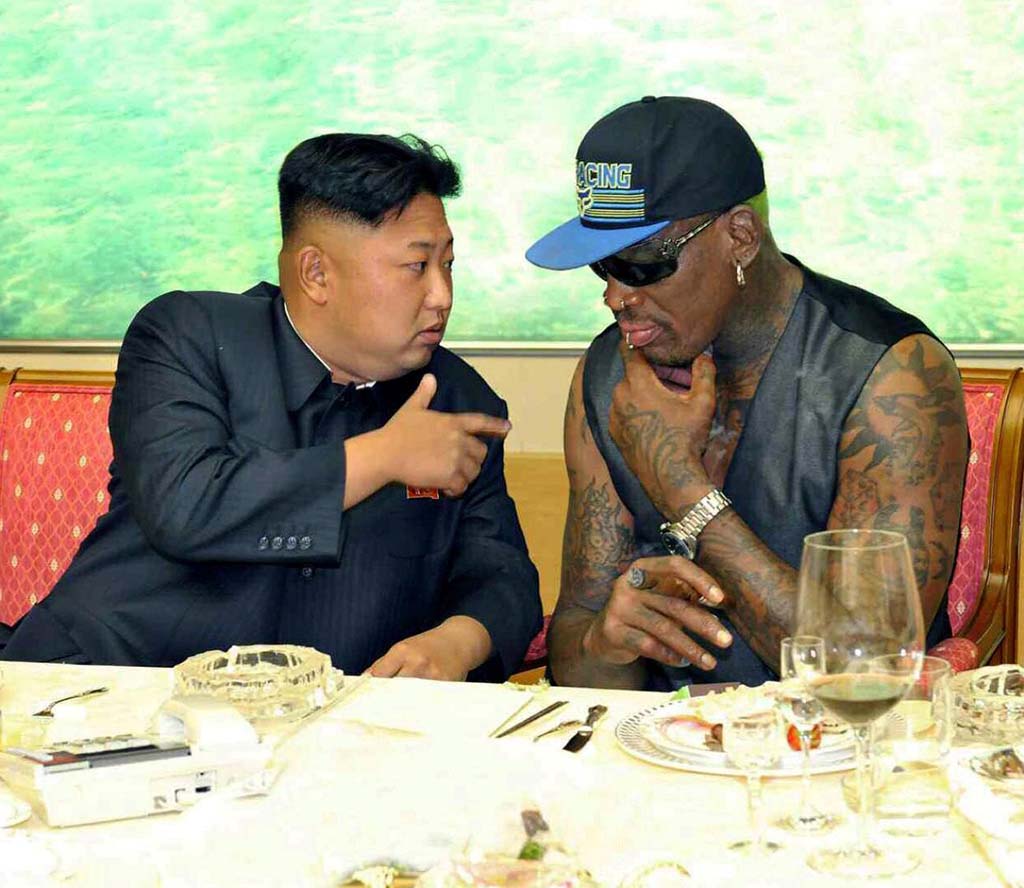 Dennis Keith Rodman, hall of fame basketball player, actor, and self-appointed political emissary, was born in on May 13, 1961 in Trenton, New Jersey to Philander and Shirley Rodman. Shortly after Dennis was born, Philander left the family and eventually settled in the Philippines. After moving to the Oak Cliff section of Dallas, Texas, Shirley Rodman worked numerous jobs while struggling to provide for Dennis and his two older sisters, Kim and Debra.

Dennis, who was no taller than 5 feet 11 inches for most of his teen years, was cut from the football team and quit the basketball team for lack of playing time. After graduating from South Oak Cliff High School in 1979, Rodman got a job as a janitor at the Dallas-Fort Worth airport. Meanwhile, a growth spurt had pushed his height to 6 feet 7 inches. In 1982 Rodman enrolled at Cooke County College in Gainesville, Texas where he dominated on the court before flunking out of school. However, word of Rodman’s rebounding and defensive intensity got around and he enrolled at Southeastern Oklahoma State University in Durant, Oklahoma where over a three year period (1983-1986) he averaged over 25 points and nearly 16 rebounds per game.

Rodman was drafted in the second round (27th overall) of the 1986 National Basketball Association (NBA) draft by the Detroit (Michigan) Pistons, where he experienced both team and individual success. The Pistons won back-to-back NBA championships in 1989 and 1990, and Rodman was named to the NBA All-Star team in 1990 and 1992, selected as NBA Defensive Player of the Year in 1990 and 1991, and led the league in rebounding for seven consecutive seasons from 1992 to 1998.  After playing with the San Antonio Spurs from 1993 to 1995, Rodman joined the Chicago (Illinois) Bulls where he teamed with Michael Jordan and Scottie Pippen to win three straight NBA titles in 1996, 1997, and 1998. Rodman’s NBA career ended when he was released by the Dallas Mavericks after playing only 12 games with the team in 2000. He continued to play for five more years both overseas and in minor leagues in the U.S. Known for his colorful hair, numerous tattoos and piercings, Dennis Rodman was inducted into the Naismith Memorial Basketball Hall of Fame in 2011.

Outside of basketball, Rodman has starred in several movies, made appearances on numerous television shows, and even took a turn alongside Hulk Hogan in World Championship Wrestling during the late 1990s.

In February 2013 Rodman traveled to Pyongyang, North Korea as a guest of Kim Jong-un, the country’s leader and self-professed basketball fanatic. Because of North Korea’s poor human rights record, Rodman faced criticism over his relationship with Kim. In December 2013 Rodman continued his “basketball diplomacy” by returning to North Korea, this time with several other retired NBA players to facilitate a series of basketball camps and play exhibition games. Rodman was again criticized in the U.S., this time for appearing to endorse the mysterious 15-year prison sentence North Korea had given to American citizen Kenneth Bae.