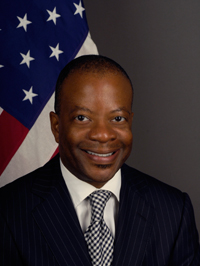 Todd D. Robinson is a career U.S. Foreign Service Officer, currently serving as U.S. Ambassador to Guatemala.  Robinson, a Minister Counselor who speaks Spanish, Italian, and Albanian, has had a wide range of postings with the Foreign Service.  Since his confirmation as Ambassador to Guatemala in September 2014, Robinson has focused on limiting human trafficking and promoting human rights in the region.

A native of Fanwood, New Jersey, Robinson earned a Bachelor of Arts and by 1985, a Master of Arts from Georgetown University, working with the University’s prestigious Edmund A. Walsh School of Foreign Service. After a brief stint as a journalist, Robinson was hired by the U.S. State Department as a member of the U.S. Foreign Service in 1986.  His first overseas posting was to Colombia in 1987. He was next sent to El Salvador in 1989.  Both Colombia and El Salvador were officially recognized as “hardship postings” by the Foreign Service because of high rates of violence and political conflict in the region.  From 1991 to 1993, Robinson worked as a Watch Officer in Washington, D.C., managing international communications within the Department of State.

Robinson returned to service in overseas diplomatic postings in 1993, first as a staff assistant to the U.S. Ambassador to Italy and he later worked in a variety of embassy and State Department positions over the following decade.  In 1995, he served as a political officer within the U.S. Embassy offices in Vatican City and La Paz, Bolivia.  Robinson returned to the U.S. in 1999 to work as a special assistant to Secretary of State Madelyn Albright before his appointment as Deputy Counselor for Political and Economic Affairs in the Dominican Republic in 2000.

Starting in 2004, Robinson served as the primary political and economic advisor to the U.S. Ambassador to Albania before becoming Consul General in Barcelona, Spain.   Robinson was recognized with Superior Service Awards in 2001 and 2006 and promoted to Senior Foreign Service status in 2007.  In 2009, he was appointed as Deputy Chief of Mission to the U.S. Embassy in Guatemala where he served until 2011 when he again returned to the United States to work as a Deputy Assistant Secretary in the State Department’s Bureau of International Narcotics and Law Enforcement.

Robinson was nominated by President Barack Obama in July 2014 to serve as U.S. Ambassador to Guatemala.  At the time, there was heightened concern about illegal child migration from Guatemala to the United States, as well as larger patterns of human, drug, and weapons trafficking.  In testimony before the Senate, Robinson pledged to press for human rights concerns in the region while also encouraging local economic development as an alternative to migration.  Political conflict between Republicans and Democrats initially stalled Robinson’s nomination along with a bloc of other State Department nominees but he was officially confirmed in September 2014.