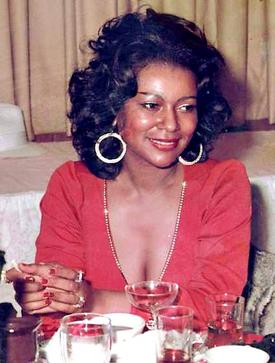 Sylvia Vanderpool Robinson was an African American singer, songwriter, musician, record label executive, and record producer, best known for her work as founder and CEO of the Sugar Hill Records hip-hop label. She is credited for being the dynamic force behind two landmark hip-hop singles, “Rapper’s Delight” by the Sugar Hill Gang released in 1980 and “The Message” by Grandmaster Flash and the Furious Five in 1982.

Robinson was born in 1936 as Sylvia Vanderpool in New York City. She attended Washington Irving High School in lower Manhattan until the age of fourteen, when she debuted singing blues with trumpet player Hot Lips Page and began recording music in 1950 for Columbia Records under the name Little Sylvia.

In 1954 she teamed up with Mickey Baker, a guitarist from Kentucky, who taught her to play guitar. In 1956 the duo recorded the rock single “Love Is Strange” by Jody Williams and Bo Diddley, which reached No. 11 on the Billboard pop charts and topped R&B charts at the beginning of 1957. The duo split up in 1959, and later Sylvia married Joseph Robinson and resumed her solo career under the name Sylvia Robbins.

Joe and Sylvia Robinson moved to New Jersey in 1966 and formed a soul music label the following year called All Platinum Records. In 1972 Robinson sent a demo to Al Green of a song she had written called “Pillow Talk.” but Green declined. Robinson recorded the song herself, this time as Sylvia, and the record reached No. 1 on the R&B chart and landed No. 3 on Billboard Hot 100 in early 1973. “Pillow Talk,” heralded as an early example of disco, eventually sold two million copies.

In 1978 the Robinsons founded Sugar Hill Records, taking its name from the affluent African American neighborhood in Harlem, New York. She found three young unknown male rappers in Englewood, New Jersey—Big Bank Hang, Master Gee, and Wonder Mike—and persuaded them to improvise their rhymes and record them as the Sugar Hill Gang. What resulted was a nearly fifteen-minute track modified from Chic’s “Good Times.” The song, “Rappers Delight,” reached No. 4 on the R&B charts, No. 56 on Billboard’s Hot 100, and sold more than eight million copies. It also introduced hip-hop to a national audience and revolutionized the music industry.

In 1982 she signed Grandmaster Flash and the Furious Five and produced “The Message.” The song, about life in the ghetto, became one of the most powerful social commentaries of its time. In 1985 the Sugar Hill label folded, partly because of competitor hip-hop labels such as Def Jam and Profile. Robinson, divorced by this time, continued her efforts as an executive music producer.

On the morning of September 29, 2011, at the age of seventy-five, Sylvia Robinson died at Meadowlands Hospital in Secaucus, New Jersey, of congestive heart failure. She is survived by her three sons Joey, Leland, and Rhondo, and ten grandchildren.

‘Empire’ Writers to Pen Movie About the “Mother of Hip-Hop,”
http://www.hollywoodreporter.com/news/empire-writers-pen-movie-mother-833206.