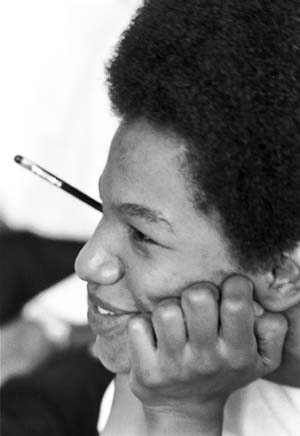 Ruby Doris Smith Robinson, born in Atlanta, Georgia on April 25, 1942, was a civil rights leader.  Robinson, the second oldest of seven children born to Alice and John T. Smith, was raised in Atlanta’s black middleclass neighborhood of Summerhill.  She graduated from Price High School in 1958 and earned a bachelor’s degree in physical education from Spelman College in 1965.  Robinson’s exposure to racial discrimination in her city, the 1955 Montgomery Bus Boycott, and the Greensboro, North Carolina sit-ins in February 1960, all influenced her to become involved in the civil rights movement.

In April 1960, Robinson attended a mass meeting for college students at Shaw University in Raleigh, North Carolina. At this meeting and under the guidance of Southern Christian Leadership Conference representative, Ella Baker, the Student Nonviolent Coordinating Committee (SNCC) was founded.  Robinson was designated a SNCC field representative and assisted in organizing chapters in Charleston, South Carolina, Nashville, Tennessee, and McComb, Mississippi.

In February 1961, four SNCC leaders—J. Charles Jones, Diane Nash, Charles Sherrod, and 18-year-old Robinson—traveled to Rock Hill, South Carolina to participate that city’s sit-in movement.  In a show of solidarity with local demonstrators, Robinson’s group initiated a “Jail-No-Bail” sit-in tactic.  This phase of the protests led to 30-day jail sentences for Robinson and hundreds of other participants.  Robinson continued her activism by participating in the 1961 Freedom Rides.  For her involvement, she served a 45-day jail term in Parchman Penitentiary in Mississippi, where prison guards brutalized her and the other activists.

Robinson also served as assistant secretary of SNCC in the Atlanta office, performing duties such as bookkeeping, organizing the 1964 Freedom Summer campaign in Mississippi, and directing SNCC’s Sojourner Truth Motor Fleet.  In 1964 she married Clifford Robinson from Atlanta, a Motor Fleet mechanic. They had a son, Kenneth Toure in 1965.

In May 1966, Robinson replaced James Forman as SNCC’s executive secretary, the first and only woman to serve in that capacity.  The following year Robinson was diagnosed with terminal cancer.  She died on October 7, 1967 at the age of twenty-five.