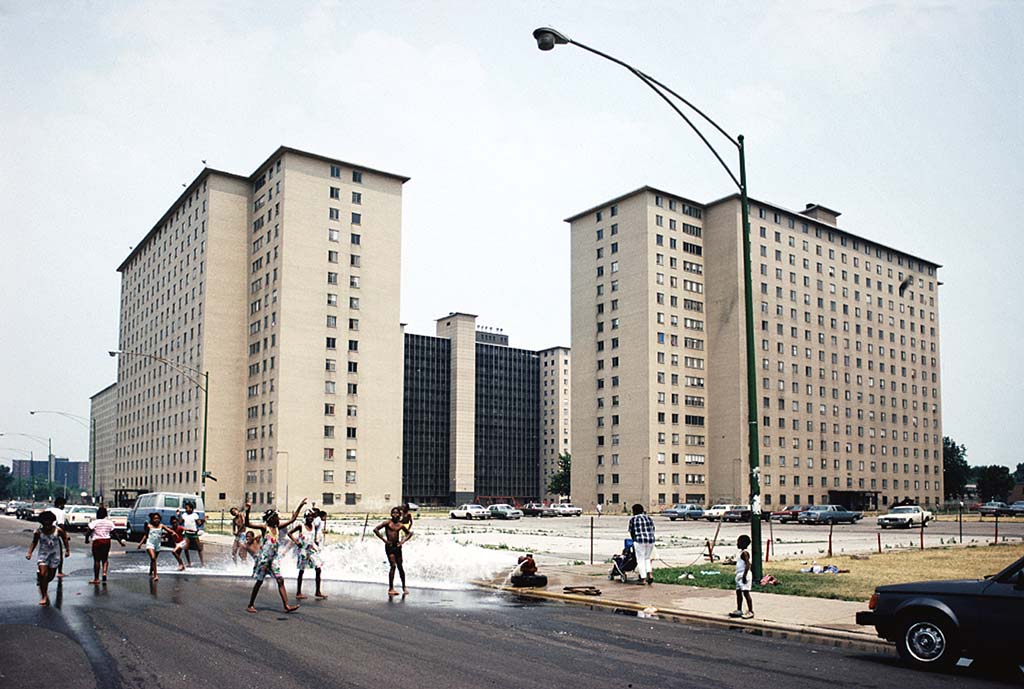 The Robert R. Taylor Homes in Chicago, Illinois were named after Robert Rochon Taylor, a black architect and civic leader who became the Chicago Housing Authority’s first African American chairman in 1942.  Construction of the Robert R. Taylor Homes began in 1959 and was completed in 1963. These 28 densely packed high rise buildings stretched two miles from 39th to 54th streets along the State Street corridor in the historic African American Bronzeville neighborhood of Chicago’s South Side.  With 4,349 units holding a total of 27,000 people at its height in 1965, the Robert R. Taylor Homes was the largest public housing project in the world.  Along with several other housing projects built between the late 1930s and 1960s, the Robert Taylor Homes were part of a massive federal urban renewal plan to eliminate slum neighborhoods.  The worst of these slums in Chicago were largely occupied by African American families who arrived in the first half of the 20th Century.

Despite protests from the Chicago Defender and the Welfare Council of Metropolitan Chicago, construction of the Homes began in 1959 during the first term of Chicago Mayor Richard J. Daley.  While the Homes and similar projects did eliminate the worst of the slum conditions, they also reinforced racial segregation since they were concentrated in black neighborhoods because of the hostility toward residential desegregation from surrounding white communities.  Whether by accident or design, the Robert Taylor Homes reinforced much of the pre-existing poverty and racial isolation of the city’s Black Belt.  Ironically Chicago city officials chose to name the complex the Robert R. Taylor Homes despite the fact that Taylor, who died in 1957, would have opposed them because they intensified racial segregation.

Considered in the early 1960s as marvels of modern architecture for the poor, it soon became evident that the design and location of the buildings removed families from needed social services and encouraged crime.  Nor did planners anticipate the consequences of large numbers of young people, especially unemployed teens, in the Robert Taylor Homes.  By the 1980s growing community poverty and unemployment help concentrate gang violence and drug dealing in these buildings which became national symbols of the failure of urban policy.

Despite having one of the highest concentrations of poverty in the nation, community and tenant leaders attempted to provide services through their Local Advisory Committee which operated through the Grace Center, a community center located at the center of the Robert Taylor Homes.  The center provided a space for tenants to discuss local issues, work with outside organizations to resolve gang conflicts and reduce crime, and foster a greater sense of community.  In 1998, however, Chicago city leaders, under Mayor Richard M. Daley (the son of Richard J. Daley), decided to replace the Robert Taylor Homes with mixed use low-rise housing.  In 2005, the last remaining building was bulldozed.