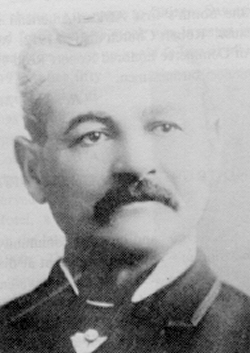 Robert Reed Church, Sr., was a millionaire business leader and philanthropist in Memphis, Tennessee.  Born in Holly Springs, Mississippi, on June 18, 1839, he was the product of an interracial union. His father was a steamboat captain, Charles B. Church, and his mother, Emmeline, was an enslaved seamstress who died when Robert was twelve years old. His father employed Robert as a cabin boy and a steward.  Surviving a near fatal steamboat sinking in 1855, Robert in 1862 was forced to be a cabin steward on a Union steamer during the Civil War.  Church married Louisa Ayres, also a former slave, in 1862.  The couple had one child, Mary Eliza, who became a prominent civil rights and women’s rights advocate.  After his marriage to Louisa ended in divorce, Church married Anna Wright in 1885 and they had Robert, Jr. who eventually followed his father into business and politics.

In 1865 Robert and Louisa Church settled in Memphis where the both became entrepreneurs.  Luisa opened a string of beauty parlors while Robert acquired a saloon and added to his holdings over the years, eventually owning a restaurant and a downtown hotel.  During the Memphis Race Riot of 1866, a white mob attacked Church’s saloon, shot him and left him for dead.  Church recovered and vowed to remain in Memphis despite the anti-black violence.  He stayed during the Yellow Fever Epidemic of 1878 and afterwards bought considerable real estates when property values were depressed.

In 1882, Robert Church entered politics.  He ran for office for the only time in his career when he campaigned unsuccessfully for a position on the Memphis Board of Public Works to press for more recreational facilites for local blacks.  Despite his failure, Church never gave up that effort and in 1899 used his own money to purchase a tract of land on Beale Street where he built an auditorium, landscaped the surrounding grounds, and called the venture Church’s Park and Auditorium, the first major urban recreational center in the nation owned by an African American.

Valued at $100,000 when built, Church’s auditorium seated more than 2,000 people and became a renowned cultural, recreational, and civic center for black Memphians. Another famous Memphis citizen, W.C. Handy, was employed as orchestra leader at the park and auditorium. Speakers and performers at Church’s auditorium included Booker T. Washington, James Weldon Johnson, and the Fisk Jubilee Singers.  In 1902, President Theodore Roosevelt spoke to 10,000 people gathered at the auditorium and on the surrounding grounds. The President’s presence and speech acknowledged Church’s political prominence in Republican Party circles.  Two years earlier, in 1900, Church had been a Memphis delegate to the Republican National Convention which had nominated William McKinley for president and Roosevelt for vice-president.

In 1906, Church, influenced by Booker T. Washington’s National Negro Business League, founded the Solvent Savings Bank and Trust Company, the first black bank in Memphis since the collapse of the Freedman’s Savings and Trust Company Bank, Memphis Branch, in 1874.  During the 1907 Panic, Church avoided a run on his bank by placing bags of money in its windows with signs guaranteed that he had adequate reserves to pay off depositors.  Throughout his years in Memphis, Church gave liberally to local school, social and civic organization and charities becoming the most prominent philanthropist in the city.  In 1893 he purchased the first municipal bond issued by the City of Memphis after its bankruptcy in 1879. In 1908 he paid off creditors to prevent them from seizing Beale Street Baptist Church.