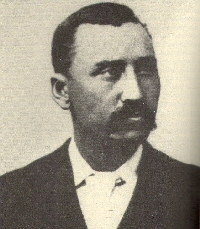 Robert Lloyd Smith, politician and businessman, was born on January 8, 1861, to free black parents in South Carolina, one of whom was a schoolteacher.  Smith attended the public elementary schools in Charleston and in 1875 he entered the University of South Carolina and remained there until 1877.

Leaving the University of South Carolina when it shut its doors to black students, Smith entered Atlanta University, where he graduated in 1880 with a Bachelor of Science degree in English and mathematics.   Smith moved to Oakland, Colorado County, Texas, where he became principal of the Oakland Normal School.  Later, he became a member of the County Board of School Examiners.  In order to help blacks economically, Smith founded the Oakland Village Improvement Society and the Farmer’s Improvement Society.  In 1895 he became involved in politics and ran successfully for the legislature in predominantly white Colorado County.

Smith’s legislative proposals primarily concerned education, race relations, and the advancement of Prairie View Normal School.  He was appointed deputy United States marshal for the Eastern District of Texas by President Theodore Roosevelt and served from 1902 to 1909.  Smith was elected the first president of the Texas branch of the National Negro Business League when it was organized in 1907.  Smith was active in various black fraternal orders and in 1915 organized and took charge of the state’s Negro Extension Division to foster improved agricultural methods among black farmers.  Smith called himself a “practical sociologist.”  He was married to Ruby Cobb, and the couple adopted two children.  Smith died on July 10, 1942 at the age of 81, and was buried in Greenwood Cemetery, Waco.