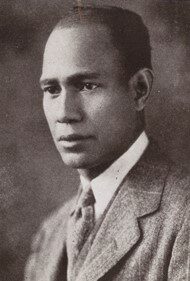 Robert Harold Ogle (born April 3, 1886) was a founder (Jewel) of Alpha Phi Alpha Fraternity Inc. (the oldest existing African American fraternity) and the first African American known to serve as a professional Senate committee staffer. Born to Jeremiah and Mary Ellen Ogle in Washington, D.C., Ogle attended M Street School. M Street School at the time was one of the top preparatory schools for African Americans, and entrance was highly competitive. Ogle secured one of the spots available, and upon completion in 1905, he enrolled in Cornell University.

At Cornell, he studied agriculture and business administration. There, he became familiar with Charles C. Poindexter, who was a graduate student in the College of Agriculture. Poindexter started a social studies group that initially met at his house. He invited Ogle to become a member. The group, which started as a support system for students of African heritage, gradually expanded to include community outreach in the Ithaca, New York, area. While on Christmas break, Ogle read a news item in the Chicago Defender (an African American newspaper) about the establishment of Pi Gamma Omicron Fraternity at Ohio State University (the first known fraternity for people of African descent). He informed other members of his group but as the fraternity quickly dissolved, information was unavailable. By the fall of 1906, many members, including Ogle, expressed a desire to move from club to fraternity.

In December of 1906, after many discussions occurred, the decision and vote to become a fraternal organization under the name of Alpha Phi Alpha Fraternity occurred. Ogle was a key player and became the organization’s first secretary. He proposed the colors, collaborated on the first ritual, and helped shape the overall mission of the new fraternity. He was also at the forefront when it came to chapter expansion. In 1907, Ogle made the motion to establish Beta Chapter (the second chapter) at Howard University, thus opening the door to the fraternity’s influence across the country.

Upon graduation in 1909, Ogle returned to Washington, D.C., first working as a clerk for judges in the city. He later secured a job with the United States Senate Appropriations Committee and was assigned to Sen. Francis E. Warren of Wyoming. Ogle’s original position title was “laborer,” later changing to “messenger,” and finally to “additional clerk.” Regardless of how they classified him, the appointment to serve as a professional Senate committee staffer is a first for a person of African heritage.

Ogle was married twice, first to Helen (Moore) Ogle and, upon her death, later to Marea (Scott) Ogle. He had two daughters with his first wife – Helen Ogle (Atkins) and Mary Ogle (Wilson). Ogle was a lifelong resident of Washington, D.C., with service to his family, community, and fraternity. Olga and fellow founder (Jewel) Nathaniel Allison Murray were members and helped charter Mu Lambda Chapter (an alumni chapter) in the D.C. area. At the time of his death, on December 3, 1936 (a day before the 30th anniversary of Alpha Phi Alpha Fraternity Inc.), there were more than 100 chapters of the fraternity across the country.