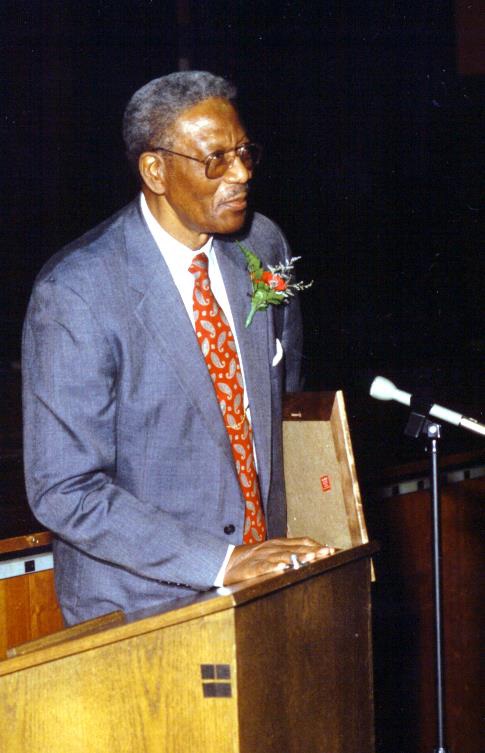 Robert Glass, the Connecticut Supreme Court’s first African American member, was born on November 28, 1922, to M.E. Jackson and Isiah Glass in Wetumpka, Alabama. His parents were young and quite poor when he was born so they were not able to pay for his schoolbooks, which was a requirement for his elementary school. His education began with books given to him by his cousin when he was ten, and then later by his mother’s employer. She worked for a judge who mentored Glass by taking him to court proceedings and conversing with the boy about law while Glass served as his caddy during golf games.

Glass, however, cites his mother as his inspiration for his becoming a judge through her “belief, conviction, and faith in the system.” After he completed law school and passed the bar, she and Glass’s father ensured he would be able to open a law office by taking out a mortgage on their home in order to give him the $500 he needed.

Glass had attended the college on a sports scholarship, where—at six feet, seven inches—he played on the basketball team. After graduation, he and another student, represented by Thurgood Marshall, fought the application requirements of University of North Carolina Law School. They succeeded, and in 1951 blacks were able to apply to the university’s law school. That same year, however, he graduated with honors from North Carolina Central University’s law school and thus did not personally benefit from his efforts to desegregate the largest law school in the state.  Glass, however, was the first African American admitted to the North Carolina bar.

In 1962, Glass moved to Waterbury, Connecticut where he became one of the first black attorneys in the state. From 1966 to 1967, Glass was an assistant U.S. attorney, the first in Connecticut and in 1967 he became the first African American judge in the Connecticut Juvenile Court system. Ten years later in 1978, he became a superior court judge in Waterbury.

In 1987 Glass was appointed associate justice on the Connecticut Supreme Court. In this position, he wrote 135 majority opinions. One of these opinions created a legal standard regarding the then-common practice of police destroying evidence.  As the first person of color in the position, Glass felt confident he had broken the barrier, so others would be able to serve in the Connecticut Supreme Court. He retired in 1992 at the mandatory retirement age of 70.  Justice Glass died nine years later on November 27, 2001, a day before his 79th birthday.

In 2008, the Justice Robert D. Glass Courthouse in Waterbury, Connecticut was named after him. In 2017, he was inducted into Silas Bronson Library’s Waterbury Hall of Fame.