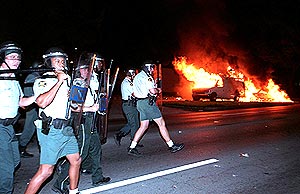 On October 24, 1996, an 18-year-old black man, TyRon Lewis, was stopped for speeding in St. Petersburg, Florida. Witnesses claimed that a white police officer, James Knight, had pointed a gun at Lewis during the stop. Knight told Lewis to get out of his car and to place his hands on his head. While he did this, the car was still in gear and began to roll forward. This prompted Knight to open fire on Lewis, shooting him to death.

While lesser known on a national level, the State of Florida’s issue with race relations had been persistent throughout its history. As a slave state in the Confederacy, federal troops had to force some plantation owners to free their slaves. In the twentieth century, the divide between blacks and whites remained apparent. Many poor blacks worked in the tourist industry in St. Petersburg but were forced to live a least a mile inland from the coast. Some communities near the city created “sundown laws” which barred blacks from entering during the night. This climate led to a series of violent race related incidents in the 1980s and 1990s. Among these was a riot in reaction to the TyRon Lewis shooting.

Unhappy with the lack of clear information regarding the police investigation into the Lewis shooting, a riot ensued near where the killing had taken place. Continuing through the night, the riot resulted in eleven injuries which included a police officer, twenty arrests, and multiple fires set by rioters causing an estimated $5 million in property damage. The unrest continued until the local police escalated their presence, backed by the Florida National Guard which arrived under the orders of then Governor Lawton Chiles.

The initial reaction of the St. Petersburg Police Department was to suspend Officer Knight for standing in front of Lewis’ car.  Less than a month after the incident, a Grand Jury determined that Knight was justified in shooting Lewis and that the incident was not racially motivated. This led to a second wave of riots, which began when police officer Keith Glasgow was shot in the leg outside the headquarters of a black separatist group, the National People’s Democratic Uhuru Movement. The organization blamed the police for causing the confrontation saying there had been a series of unwarranted arrests of its members by local law enforcement.

St. Petersburg riot continued to impact the black community two decades later.  In 2016, members of the Uhuru Movement renamed the site of the shooting, “Tyron Lewis Avenue” without the city’s permission.  While the St. Petersburg Police referred to the street name as a “slap in the face,” members of the black community believed that the name was justified.  This tension illustrated the longstanding tension that remained decades after the riot.