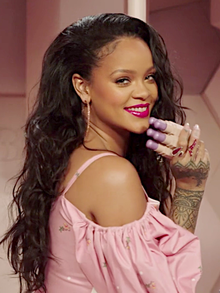 Robyn Rihanna Fenty is a multitalented singer, actress and fashion designer from Barbados, best known by her middle name. She was born on February 20, 1988 in Saint Michael, Barbados to Monica (Braithwaite) and Ronald Fenty. In her youth, Fenty attended Charles F. Broome Memorial Primary School and Combermere School, where she was an Army cadet in a sub-military program. Fenty suffered from extreme migraine headaches as a child, and while numerous CT scans and tests determined no medical cause, her health improved after her parents tumultuous and abusive relationship ended in divorced when she was fourteen.

By age fifteen, Fenty formed a trio with high school classmates. The girls landed an audition with American producer Evan Williams, but Williams was only interested in Fenty. After her second audition, Fenty recorded a few demos in the United States which resulted in her being unable to complete high school. Fenty auditioned for Def Jam CEO Jay-Z and producer L.A. Reid in 2005 which led to her signing a six-record contract. Her debut album, Music of the Sun (2005), was certified gold after selling 500,000 copies, and was followed immediately by her second album, A Girl Like Me (2006), which was certified platinum after selling over 1,000,000 copies worldwide. The third studio album, Girl Gone Bad (2007), has since received two platinum certifications.

Fenty consecutively released several albums over the next few years – Rated R (2009), Loud (2010), Talk That Talk (2011), and Unapologetic (2012).  She has toured in over 30 countries, and also has appeared in numerous films and television shows. Fenty left Def Jam in 2014 to sign with Roc Nation. Her eighth studio album, Anti (2016) was released on the streaming service Tidal, of which Fenty is one of 18 co-owners. As a fashion icon, Fenty is the only woman to be featured on the cover of GQ magazine (December 2012). She has created five fragrances, including one for men, a beauty and stylist agency, a photo agency, and was the first woman of color to release a fashion brand under the group LVMH (Moët Hennessy Louis Vuitton). Fenty also has a cosmetic line, a lingerie brand, and a skin care brand.

Throughout her career so far, Fenty has received 12 Billboard Music Awards, 13 American Music Awards, nine Grammy Awards, eight People’s Choice Awards, as well as The Icon Award (2013), and the Michael Jackson Video Vanguard Award (2013), Harvard University Humanitarian of the Year (2017), and she holds six Guinness World Records. She is the first and so far, only artist to surpass 100 million gold and platinum song certifications. Selling over two hundred and fifty million records worldwide makes her the second bestselling female artist in the last century after Madonna.

Fenty has collaborated with numerous artists to include Bono, Eminem, Shakira, Madonna, Drake and others. In her philanthropy efforts, Fenty has also donated more than $30 million to several different organizations including HIV/Aids, Domestic Violence Victims, Covid-19 relief, and Cancer research. In 2008, February 22 became known officially as “Rihanna Day” in Barbados, a street in her hometown was renamed after her, and in 2018, she was named as Ambassador for Culture and Youth for Barbados by its foreign ministry. In 2019, Forbes listed her as the richest female musician in the world, with an estimated fortune of over $600 million.