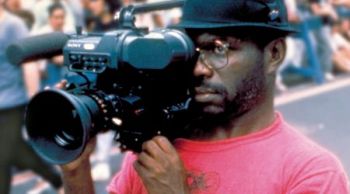 Marlon Riggs was a black gay writer, filmmaker, and social activist. He was born in Fort Worth, Texas to a military family on February 3, 1957, and spent his childhood at various military posts, including time spent living in Georgia and Germany. Riggs graduated with honors from Harvard University in 1978, returned to Texas for a few years to work in television, then attended the University of California, Berkeley for a master’s degree in journalism in 1981. He then worked for several years in film under various directors until he began directing and producing his own documentaries, all incisive social commentaries on black identity and the role of African Americans in the United States.  His first documentary, Ethnic Notions (1987), focused on the stereotypes of African Americans that haunt American society.

His second full length documentary Tongues Untied (1989) was dedicated to breaking the silence of the black gay male community.  Color Adjustment (1991) was an indictment of the treatment of African Americans in popular American television. Riggs did not live to see the completion of his final film, Black Is… Black Ain’t. He died on April 5, 1994 of an AIDS-related illness before filming was finished. He was survived by his partner of 15 years, Jack Vincent.

All of Riggs’s work confronted controversial and divisive issues facing the African American community including especially portrayals of black masculinity. As an artist and an activist, Riggs intended his films to create conversations about black identity and to open a variety of acceptable ways to be black including embracing lives that aren’t comfortably middle class. In Tongues Untied, Riggs examines issues of identity as a black and gay man and the intersection of those two identities. Deeply personal and emotional, the film was never shown on television but was successful at film festivals; it won several awards including Best Documentary Film at the Berlin International Film Festival.

The final film of Riggs’s career, Black is… Black Ain’t, provided a unifying theme for his body of work. In Black Is, Riggs strikes out to find a definition of black identity that includes all the varieties of black experience.  He challenges the viewer to replace an imagined homogeneous, unified culture with a vision of vastly different people who come together as a single community. The film admits the difficulty of this task, highlighting the many divisions within the black community: male v. female, urban v. rural, dark v. light, assimilationist v. separatist, straight v. gay. But Riggs, who narrates much of the film from his hospital bed as he lies dying, remains hopeful that even those on the margins of the black community can be recognized as legitimate parts of the African American world.