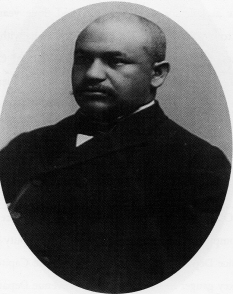 Dr. Matthew Oliver Ricketts was the generally acknowledged political leader of Omaha’s African Americans at the turn of the 20th century.  Ricketts was born to an enslaved couple near New Castle, Kentucky in 1858.  He later received a degree from Lincoln Institute at Jefferson City, Missouri, and three years later moved to Omaha.   When he arrived in Omaha in 1880, despite scarce resources, he was admitted to Omaha Medical College, where he worked as a janitor to pay his tuition.   Elected to the state legislature for the sessions of 1892 and 1894, he became the first Nebraskan of African descent to sit in that body.   He was credited with the creation of the Negro Fire Department Company, and was also credited with securing appointments for blacks in government positions.

Ricketts led a campaign to strengthen Nebraska’s 1885 civil rights law.  In 1893 the state’s lawmakers passed a measure prohibiting the denial of services in public facilities to anyone on account of race mainly, at Ricketts’s urging.  It is noteworthy that this measure was enacted just as most southern states were in the process of establishing Jim Crow facilities.  After leaving the legislature, Ricketts was an unsuccessful candidate for a federal position, but his appointment was opposed by a Nebraska congressman.  In the early 1900s he left Nebraska to continue his medical career in St. Joseph, Missouri.  A leader of the Prince Hall Masons, Ricketts was elected Worshipful Master of Omaha Excelsior Lodge No. 110, and later Grand Master of the Missouri Grand Lodge.  He died in St. Joseph, Missouri in 1917, at the age of 64.