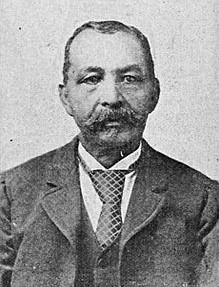 Richard Howell Gleaves was a Haitian-American merchant, lawyer, politician, and the 55th Lieutenant Governor of South Carolina. Greaves was born free on July 4, 1819, in Philadelphia, Pennsylvania, to a Haitian father and English mother. He received his early education in Philadelphia and New Orleans. He first worked as a steward and trader on steamboats running on the Mississippi River, before moving on to work as a merchant in Ohio and Pennsylvania from the mid 1840’s to to the mid 1860’s. In those years, Gleaves was active with the Prince Hall Freemasons, and assisted in the development of lodges throughout the North. He served as the sixth Grand Master of the Prince Hall National Grand Lodge of North America, and established the first Prince Hall Lodge in Ohio in 1848.

Gleaves married his wife Georgianna before moving to Beaufort, South Carolina in 1866. He practiced law and entered into business with Robert Smalls. He purchased property in the 600 block of West Street, that included a black fraternal hall on the land. Gleaves helped to organize and form the South Carolina Union League, as well as the Republican Party of South Carolina, and served as the party’s president of the State Convention in 1867. In 1870, Gleaves was arrested and charged with election fraud. There were two trials, with the first one ending in a conviction, but the second in an acquittal.

Gleaves ran for re-election in 1876 and won, and then presided over the first session of the fifty-second General Assembly from November 28 to December 22, 1876, and served as a delegate to the 1876 Republican National Convention. He reigned on April 24, 1877, due to massive fraud in the election, and left South Carolina after being indicted by a Richland County grand jury for issuing false pay certificates to state legislators. Gleaves was the last Republican Lieutenant Governor of South Carolina until 1994.

Moving on to Washington, D.C., Gleaves worked as a clerk in the U.S. Treasury Department from 1877 to 1879. He returned to South Carolina when President James A. Garfield appointed him to the position of Special Customs Inspector in 1880 and served until 1882. He then retired from his government serves, moved back to D.C., and worked as a waiter at The Jefferson Club. He died in November of 1907 at the age of 88.