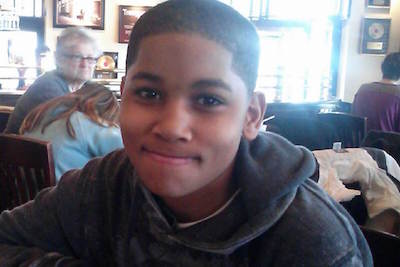 The shooting death of twelve-year-old Tamir Rice in 2014 brought increased attention to the national debate on interactions between police officers and African Americans. Tamir Elijah Rice was born to Samaria Rice and Leonard Warner on June 15, 2002, in Cleveland, Ohio. At times, Rice’s family life was turbulent as Warner was convicted of domestic violence against Samaria Rice in 2010, while Rice herself pled guilty to drug trafficking charges in 2013. Tamir Rice, who appeared older than twelve because of his 195-pound frame, attended sixth grade at Marion-Seltzer Elementary School in Cleveland and was described as a pleasant young man who enjoyed art and playing sports.

On November 22, 2014, Rice was walking in a park outside the Cudell Recreation Center, a place he frequented. Rice had a black Airsoft pellet gun, without the orange safety indicator usually found on the barrel, and was playing with it around the park. A 911 caller reported Rice’s activities but expressed uncertainty to the dispatcher about whether the gun was real. Two Cleveland police officers, Timothy Loehmann and Frank Garmback, both white, responded to the call but were not informed that the gun might be a fake. Security camera footage showed a police cruiser driven by the forty-six-year-old Garmback, who had been with the force since 2008, race into the frame and stop.

Within two seconds, Loehmann had opened the passenger door and fired two shots at Rice, who was approximately ten feet away. Loehmann claimed he had told Rice to raise his hands three times as the car pulled up, but Rice failed to obey. This could not be verified independently since the footage did not have audio. Rice, who fell to the ground immediately after being shot, died the next day in the hospital. Officer Loehmann was a twenty-six-year-old rookie who had been on the job in Cleveland for eight months. Prior to this, he had been rejected for police jobs in several nearby towns and cities as well as the Cuyahoga County Sheriff’s Department. Loehmann was hired by the police department in Independence, Ohio, but resigned in November 2012 after a poor performance review.

The timing of these events came on the heels of the Michael Brown case in Ferguson, Missouri, and the beginnings of the Black Lives Matter movement. Several hundred protesters gathered in downtown Cleveland on November 25 in response to both Rice’s killing and the decision not to indict the police officer who fatally had shot the unarmed eighteen-year-old Brown in August 2014. Demonstrators temporarily blocked rush-hour traffic after marching down an exit ramp to a busy freeway.

Tamir Rice’s funeral was held on December 3, 2014, at Mt. Sinai Baptist Church. On October 27, 2015, a grand jury began hearing the Tamir Rice case. Officers Loehmann and Garmback were subpoenaed and appeared in front of the grand jury on December 1 to read their sworn statements. On December 28, the grand jury returned a decision not to indict either officer in the deadly shooting. On January 1, 2016, more than one hundred protesters marched to the home of Cuyahoga County Prosecutor Tim McGinty in West Cleveland. Police accompanied the group along the way and stood in McGinty’s driveway but did not intervene as demonstrators repeatedly called for the prosecutor’s resignation. McGinty lost his bid for re-election in March 2016, after a single tumultuous term.