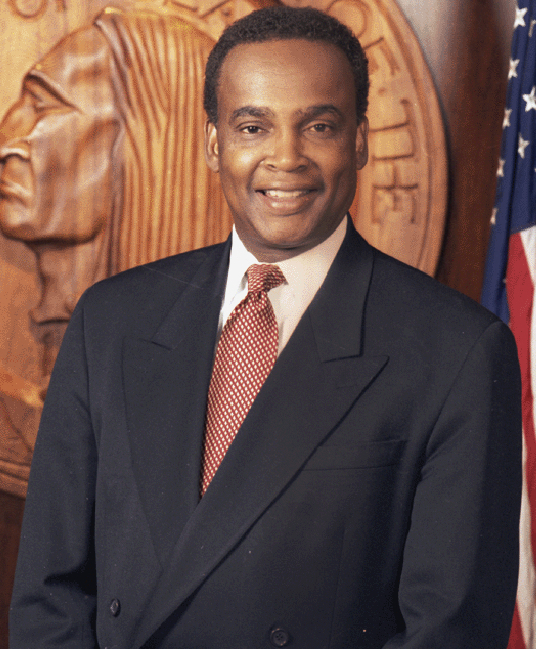 Future mayor of Seattle, Norman B. Rice was born in Denver, Colorado.  He migrated to Seattle in 1970 to attend college.  In 1972 he earned a bachelor’s degree in communications and two years later a master’s degree in public administration both from the University of Washington.

Rice then worked as a television news reporter on Seattle’s KOMO-TV and KIXI radio.  Following his media stint, he held a series of administrative positions.  Rice served as assistant director of the Seattle Urban League, Executive Assistant and Director of Government Services for the Puget Sound Council of Governments, and Manager of Corporate Contributions and Social Policy at Rainier National Bank.

Norm Rice’s political career began in 1978 when Seattle residents elected him to fill a vacancy on the City Council.  He was reelected to the Council in 1979, 1983 and 1987. Rice ran for mayor in 1985 but lost to incumbent Charles Royer, another former journalist.  In 1988 he ran unsuccessfully for the Democratic Party nomination for the 7th District, losing to former Washington state senator Jim McDermott.

During his 11 years on the council, Rice chaired the Energy, and Finance and Budget, committees, and also served a term as Council President.  As a member of the Finance and Budget Committee, he worked for more equitable utility rates by Seattle City Light, the city owned utility, lobbied for the passage of the Women and Minority Business Enterprise Ordinance, and called for Seattle companies to end their investments in apartheid-dominated South Africa.  Rice also worked to lower crime in Seattle and supported the use of city funds to help impoverished Seattle residents.

On July 28, 1989, Rice filed his candidacy for mayor of Seattle and three months later on November 7 defeated city attorney Doug Jewett by 99,699 votes to 75,446 to become Seattle’s 49th mayor. He was also the first African American mayor of Seattle.  Rice was elected to a second term in 1993.

During his tenure as mayor, Rice streamlined the Seattle Public School system, promoted human rights, and led the city during the 1990s downtown rejuvenation.  His effectiveness as mayor also gave him the opportunity to serve as president of the U.S. Conference of Mayors.  In 1996, Rice ran for the Democratic nomination for Washington Governor but was defeated by Gary Locke, the King County Executive.

After almost two decades of working in city government, Rice returned to the business world in 1998 as chief executive of the Federal Home Loan Bank of Seattle.  As CEO he led an effort by over 400 financial institutions to provide housing and community development in Seattle’s neglected areas.  Under his leadership, the Seattle Federal Home Loan Bank created homeowner programs and funding plans to assist economically challenged families and neighborhoods.  The programs allowed a number of first time home buyers to purchase houses throughout the city.

Rice stepped down as CEO of the Federal Home Loan Bank in 2004 to become Vice Chairman of Capital Access LLC, an investment bank. He also serves as distinguished visiting professor at the Daniel J. Evans School of Public Affairs at the University of Washington.   Rice has continued his public involvement as co-chair of the Capital Campaign for the University of Washington and a board member for Youthcare, a nonprofit organization that assists homeless teenagers. He is a member of Alpha Phi Alpha and Sigma Pi Phi fraternities.