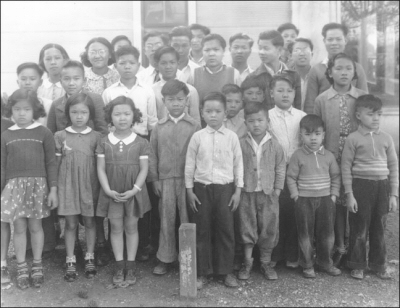 In this constitutional case, the U.S. Supreme Court, composed entirely of Bok Guey (whites), adjudged Hon Yen (Chinese) to be in the same social classification as Lo Mok (blacks).  The Supreme Court’s decision permitted the state of Mississippi to define Martha Lum as a member of the “colored races” so that “white schools” could remain segregated.  The origins of “Lotuses among the Magnolias” involved southern planters’ fears that emancipation had spoiled their newly freed slaves.  The question posed by planters was whether the freed people would work without the sting of the lash. Planters answered by recruiting Chinese labor and by 1900 the majority of coolie labor came from the “Sze Yap” or Four Counties district southwest of Canton in South China.

By the 1920s a thriving Chinese community had developed in Mississippi which now included school age children.  In 1924, Rosedale Consolidated High School forced Martha Gong Lum, daughter of a prosperous Chinese grocer, to leave school because of her ethnicity.  The Gong Lums sued but the Mississippi Supreme Court ruled, “Chinese are not white and must fall under the heading, colored races.”  On appeal to the U.S. Supreme Court, the Gong Lums listened as the high court justices agreed with the Mississippi court and stated, “Similar laws (of segregation) have been enacted by Congress under its general power…over the District of Columbia as well as by…many of the States…throughout the Union, both in the North and South.”