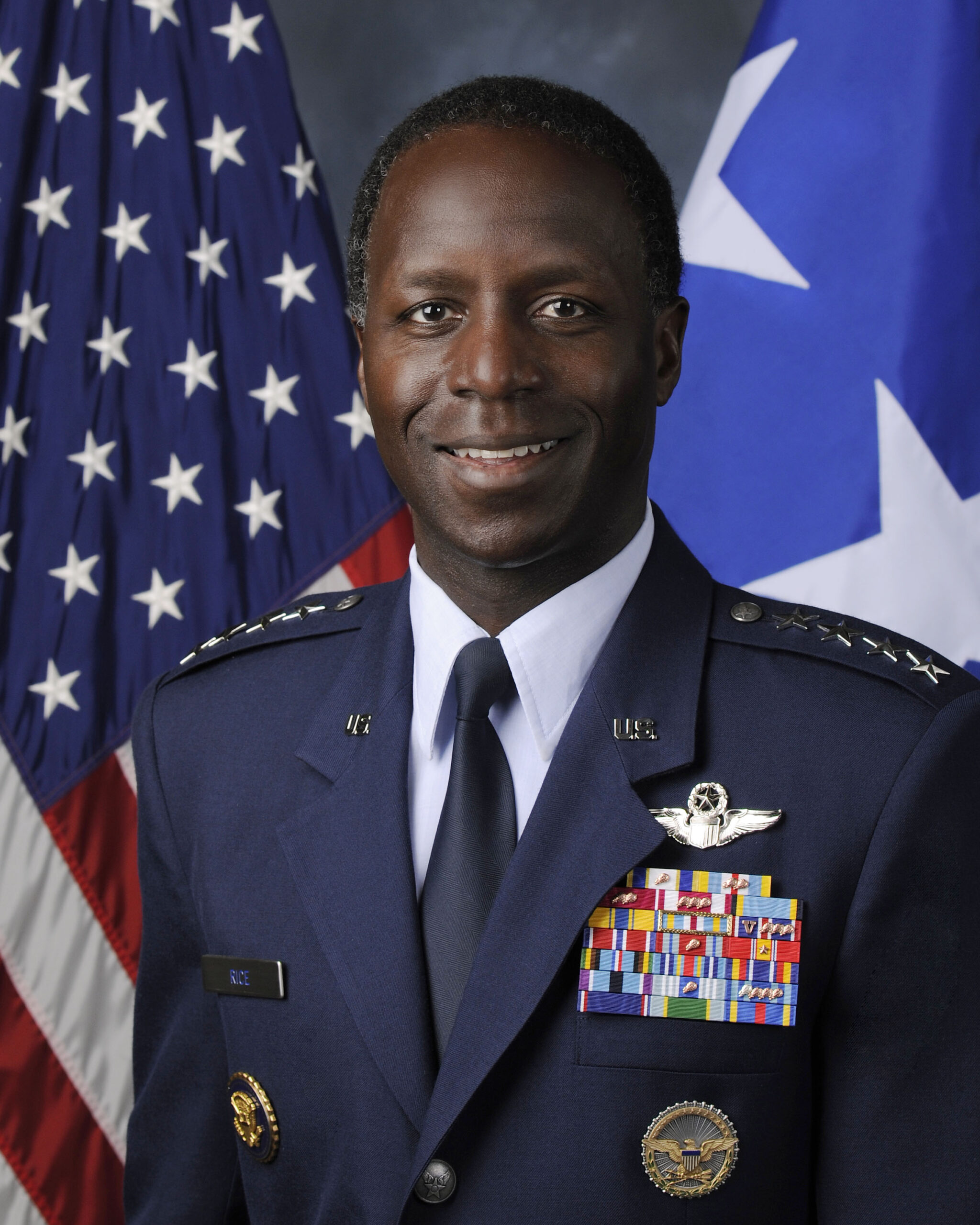 Retired 4-star Air Force General Edward A. Rice, Jr. was raised in Yellow Springs, Ohio, the son of Edward A. Rice, Sr., an Air Force major, and Josie Rice. He entered the United States Air Force Academy at Colorado Springs, Colorado, where he graduated with distinction and a bachelor’s degree in engineering sciences in 1978. He was the first African American at the Academy to be a Cadet Wing commander.

With his fresh commission as a second lieutenant he began undergraduate pilot training at Williams Air Force Base, Arizona. Selected to fly Boeing’s four-jet engine B-52 Stratofortress, Rice eventually mastered it and became commander and instructor at postings to Loring Air Force Base, Maine, and Mather Air Force Base, California. Altogether, as a pilot he logged nearly 4,000 hours flying not only B-52s but also the E-3 surveillance and communications jet; the KC-135 refueler; the T-37 training jet; the C-130 turboprop transport; the B-1 supersonic variable-sweep wing heavy bomber; and the B-2 stealth bomber. Prior to 2002, Rice had staff assignments in Washington, D.C. at the Air Staff Training Program; Air Crew Managing; Commission on Roles and Missions of the Armed Forces; National Security Council at the White House; and Air and Space Operations. He also filled staff positions as Commander at Sawyer Air Force Base in Michigan, Castle Air Force Base in California, Whiteman Air Force Base in Missouri, Tinker Air Force Base in Oklahoma, and Ellsworth Air Force Base in South Dakota.

On November 17, 2010, Rice was promoted to full 4-star General when he was made Commander, Air Education and Training Command (AETC), at Joint Base San Antonio-Randolph, Texas, occupying one of the ten leading command posts in the United States Air Force. In this last assignment, Rice was responsible for overseeing the education and training of approximately 293,000 students per year, involving twelve bases, nearly 68,000 active-duty, Reserve, Guard, civilians and contractors, and some 1,400 trainer, fighter and mobility aircraft.

Rice earned a master’s degree in national security at the Naval War College, a master’s degree in aeronautical science and technology from Embry-Riddle Aeronautical University, and served as a National Security Fellow at Harvard University. Edward Rice retired from military service in December 2013 and became Executive Vice President of Partners for Community Change at United Way of San Antonio & Bexar County. He currently sits on the advisory board of Data Systems Analysts, Inc., a technology solutions firm in Pennsylvania, and SAM Ministries, a support services and advocacy organization for the homeless. Rice and his wife, Teresa, are the parents of two adult daughters and reside in San Antonio, Texas.