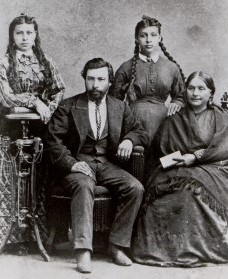 California’s 18th Century history is imbedded with that of settlers from many racial and cultural groups. Terms such as mestizos, mulattos, espanoles, lobos and coyotes indicated a variety of Indian, Spanish, and Mexican, white and black families who migrated into the area in the 18th century.  El Pueblo de Nuestra Senora Reina de los Angeles sobre El Rio Porciuncula (eventually shortened to Los Angeles) was founded in 1781 by 46 settlers who were members of these groups who made their way north from Baja California.

Juan Francisco (also Fernando) Reyes, a mulatto settler who arrived shortly after the original party of settlers in 1781, symbolizes the racially diverse origins of the city.  In 1793 Reyes became the first elected mayor of the hamlet, a position he held for two years.

Reyes by any measure of his times was a wealthy man.  He was the Spanish Crown’s first land-grantee in the area.  Reyes’s lands included an area which the Catholic Church wanted to build a mission.  Reyes sold the property during his last year as mayor.  Two years later in 1797 the San Fernando Mission was completed.

Reyes’ tenure as the first “black mayor” of the town was brought to light during the term of Thomas Bradley, who was mayor from 1973 to 1993 and who was generally considered the first person of African ancestry to hold the post.  Reyes, in fact holds that distinction.  Equally overlooked is the fact that he was the first “Hispanic mayor” of the small town, rather than Mayor Antonio Villaraigosa who was popularly elected in 2005.

Descendants of the Reyes family remain in the Los Angeles area until present times.  The family’s historic home is now known as the Reyes Adobe Historical Site and is located in Agoura Hills California.