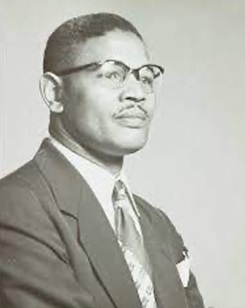 Reverend Henry Clay Anderson was a pastor, teacher, veteran, and photographer, best known for capturing the lives of the black middle class of Greenville, Mississippi from 1948 to 1986. He was born in Nitta Yuma, Mississippi, in 1911 and spent his childhood in Hollandale outside of Greenville, Mississippi. No information is known about his parents or siblings, except that he had a brother who worked at an insurance company in the same building as his photography studio. Anderson attended the segregated Washington County Schools for his early childhood and high school education. His love for photography began when his family gave him a box camera to play with at nine years old.

Anderson married Sadie Lee with whom he had no children. His first occupation was as a teacher before he served in World War II. When he returned from the war to Greenville in 1946, the GI Bill of 1944 allowed Anderson to attend Southern University in Baton Rouge, Louisiana. There, he studied photography from 1946 to 1948 when he opened the Anderson Photo Service. His photography studio did not earn enough to support him and his wife financially, so he worked several other jobs throughout his photography career. These included being a pastor of King Solomon Baptist Church, a voter education teacher through the Southern Christian Leadership Conference during the late 1950s through the 1960s, and a candidate for the Greenville City Council as a Freedom Democratic Party member in 1965 and for the justice of the peace position in District 2 of Washington County in 1971.

Anderson’s photography is notable because he depicted a middle-class blackness that seemed to exist without much racial strife and violence as other Mississippi communities from the 1940s to the 1970s. His work offers a glimpse into young women’s lives participating in beauty pageants, families relaxing in luxury living rooms and on porches, gentlemen and ladies dressed for elegant occasions, and children celebrating birthdays. He recorded what has been called by many a “hidden” portion of middle-class black lives during this period. However, his most recognized work is also his most upsetting: the funeral of Reverend George Lee, who was murdered while helping blacks register to vote in May of 1955. Anderson’s photos of Lee’s marred face and mourning relatives made it into publications of Jet, Ebony, Life, and Time in 1955.

In 2010 Shawn Wilson featured Anderson in a short film called Separate, But Equal, which briefly describes Anderson’s cultural and historical impact. Wilson and photography dealer Charles Schwartz have now recovered Anderson’s many undeveloped photo negatives. They can be found in the book Separate But Equal: The Mississippi Photographs of Henry Clay Anderson, published in 2002. All 4,893 photos in his collection are held by the Smithsonian’s National Museum of African American History and Culture and are accessible on their website. Anderson died in 1998. He left all his photos to Wilson, who has been dedicated to preserving Anderson’s legacy.