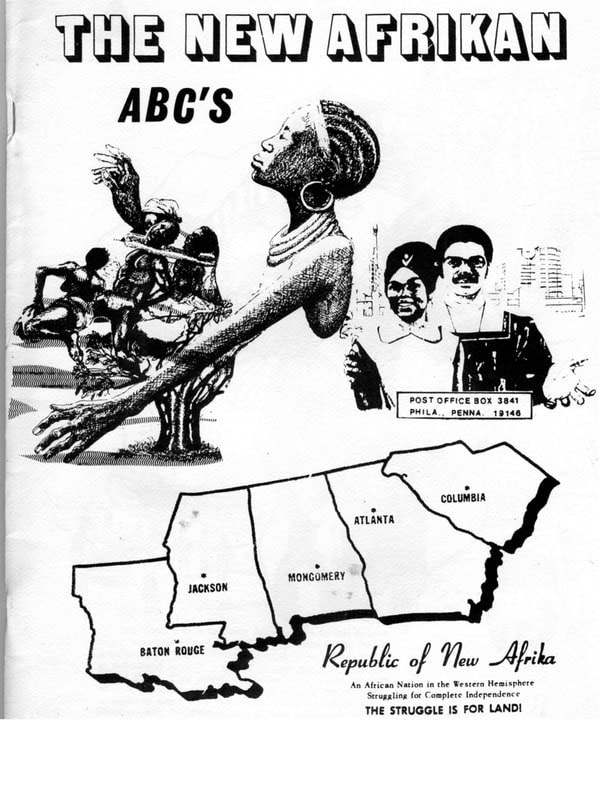 The Republic of New Africa (RNA) is a black nationalist organization that was created in 1969 on the premise that an independent black republic should be created out of the southern United States of South Carolina, Georgia, Alabama, Mississippi, and Louisiana, which were considered “subjugated lands.” The group’s manifesto demanded the United States government pay $400 billion in reparations for the injustices of slavery and segregation. It also argued that African-Americans should be allowed to vote on self-determination, as that opportunity was not provided at the end of slavery when the 14th Amendment to the U.S. Constitution incorporated African-Americans into the United States. The economy of the RNA was to be organized based on ujamaa, Tanzania’s model of cooperative economics and community self-sufficiency. Citizens of the proposed RNA would have limited political rights, unions would be discouraged, freedom of the press would be curtailed, men would be forced to serve in the military, and polygamy would be allowed.

Two brothers, Milton and Richard Henry, who were associates of Malcolm X, formed an organization called the Malcolm X Society, which was devoted to the creation of an independent black nation within the United States. Milton and Richard subsequently changed their names to Gaidi Obadele and Imari Abubakari Obadele, respectively. The brothers organized a meeting of 500 black nationalists in Detroit, Michigan in 1968.  Exiled former North Carolina NAACP leader Robert Williams was chosen as the first President of the Republic of New Africa. The group wrote a declaration of independence and established the Republic of New Africa. The group anticipated that the U.S. would reject their demands and made plans for armed resistance and a prolonged guerrilla war.

Both federal and local governments reacted to the RNA with suspicion, and had violent conflicts with the RNA. The RNA was a target of the Federal Bureau of Investigation’s (FBI) COINTELPRO, its anti-radical program of surveillance, disruption, and subversion. Detroit police raided the RNA’s first anniversary conference in 1969 and one police officer was killed during the raid. Three RNA members were acquitted of any crimes in this incident.  Police in Jackson, Mississippi raided RNA headquarters, and another police officer was killed. Eleven RNA members, including founder Imari Obadele were arrested and convicted for assault, murder, and sedition. Three other members, while driving to RNA headquarters, killed a police officer in New Mexico who had pulled their car over. They subsequently hijacked a plane and escaped to Cuba.

Soon after Imari Obadele was released from prison he and six others were convicted on federal conspiracy charges. He was released in 1980 and went on to earn a Ph.D. from Temple University in political science and has taught at several colleges and written numerous books and articles on black separatism, which he still advocates.

The RNA’s popularity and influence diminished with most of its leaders in prison, but it still claims a membership of 5,000 to 10,000. Its headquarters have been moved to Washington, D.C.