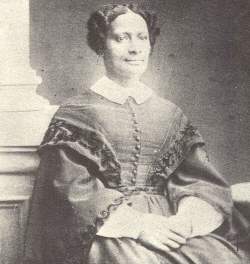 Born in 1824 Sarah Parker Remond entered the world as a part of an exceptional family. The ninth child of two free born and economically secure black parents, her life was unusual among African Americans. It was unimaginable in the minds of most white Americans. Before her death Sarah carried her family’s legacy well beyond the shores of her native land.  With financial security rooted primarily in food catering and hair salons, the men and women of the Remond clan actively supported antislavery and equal rights for all.  After honing her skills lecturing against slavery in the Northeast and Canada Sarah expanded her reach across the ocean.

In January 1859 Sarah Parker Remond delivered her first lecture in Liverpool, England, gradually incorporating Ireland and Scotland into her itinerary.  With the approach of the Civil War Remond urged Europeans to lend their support to the North and the “poor enslaved Blacks of the South.”  During this time she also decided against returning to the United States.  By 1868 Sarah Parker Remond had settled in Italy and completed some form of medical training.  Although subsequent records of her life remain scarce, one of the last sightings comes from none other than Frederick Douglass. While visiting Italy in 1886 Douglass encountered Remond and two of her sisters.  All three Remond women had chosen exile over life in the United States.  On December 13, 1894, Sarah Parker Remond died of undisclosed causes.  She is buried in the Protestant Cemetery in Rome.