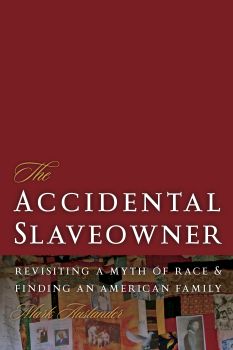 The Accidental Slaveowner: Revisiting a Myth of Race and Finding an American Family (University of Georgia Press, 2011) by Mark Auslander
Fair use image

In the account below Central Washington University anthropologist Mark Auslander describes why he wrote The Accidental Slaveholder, which describes the curious ways in which the legacy of slavery extend into the contemporary era.

I grew up in Washington D.C. in a secular Jewish family in a predominantly white neighborhood, with only a limited sense of the richness and complexity of African American D.C. It took me a long time to find my way back, as it were, to my hometown.

In graduate school at the University of Chicago, I was trained as an Africanist anthropologist, and spent over two years doing ethnographic fieldwork in a village of the Ngoni people of eastern Zambia. My studies concentrated on ritual performance and changing popular perceptions of landscape amidst neoliberal economic conditions. Among other things, I worked extensively on the sacred symbolism of trees and burial grounds. Years later, teaching in rural Georgia, I found myself increasingly drawn to local African American cemeteries, which reminded me, often in ways I could not quite articulate, of comparable locales in central and southern Africa.

One burial ground in particular fascinated me. The segregated cemetery of Oxford, Georgia– the birthplace of Emory University–had long been a political flashpoint. Since 1965, the town’s white-dominated city council had channeled fees paid by bereaved African American families to an all-white foundation, which exclusively maintained the white half of cemetery. Gradually, the African American ceremony became overgrown and its graves, many dating back to the time of slavery, became inaccessible to black families.

In the spring of 2000, my students and I at Emory University’s Oxford College partnered with local African American congregations to restore the historic African American cemetery, document previously unmarked graves, and campaign for the cemetery’s desegregation. By 2001, the city and the cemetery foundation agreed to provide perpetual care for all burial plots in the entire cemetery, irrespective of race.

In the course of this project, I became fascinated by a monument in the heart of the historically “white’ cemetery; a large stone tablet, erected by white segregationists in the late 1930s, celebrated the story of the enslaved woman known as “Kitty,” owned by Methodist Bishop James Osgood Andrew, first president of the Emory College board. The tablet declared that Bishop Andrew had tried to free Kitty when she turned nineteen in 1841, but that she had willingly remained in slavery; to reward her for her loyalty the Bishop built her a small house behind his own and allowed her to live in virtual freedom for the rest of her life.

In 1844, Bishop Andrew’s ownership of Kitty and other enslaved persons became a matter of national controversy, as antislavery northern Methodists protested that a Bishop could not legitimately own slaves; in the resulting tumult, white southern Methodists seceded from the national church to found the Methodist Episcopal Church, South, which remained separate from the northern church for nine decades.  For many whites in Oxford, Georgia, the story of Kitty, as a “loyal slave” still evokes the grace and “mutual understanding” between the races that, to their minds, exemplified the Old South.  White residents renamed the slave quarters in which Kitty had resided, “Kitty’s Cottage,” and lovingly restored it as a heritage site without consulting their African American neighbors. They assert that the Bishop had been morally blameless and was simply an “accidental slaveowner.”

For generations  African American families in Oxford and Covington have quietly told a very different story of “Miss Kitty” (unlike their white neighbors, they insist on referring to her with a courtesy title). They insist Miss Kitty was the coerced mistress of Bishop Andrew, that he most likely fathered at least one of her three children, and that no white man ever could have been an “accidental” slaveowner. The large stone tablet is seen as an outrageous instance of white supremacist myth-making, fraudulently representing slavery as benevolent.  Kitty’s Cottage, regarded nostalgically by most whites, is regarded by African Americans as a site of painful violation, to be avoided at all costs.

I began to write about how these competing narratives had been told and retold in white and African American families across 160 years.  It struck me that these acts of story-telling represented what anthropologists call the “mythic imagination,” the endlessly inventive ways in which human beings poetically dramatize and meditate upon the central mysteries of existence.  In telling these intertwined stories about Miss Kitty and Bishop Andrew, African American and white families came to reflect, at times indirectly, upon the core enigmas of American history and culture–race and difference, bondage and liberation, love and kinship, fidelity and betrayal.

At first I planned only write to about these competing mythologies of race, to excavate the divergent shadow memories of slavery that still haunt Americans of all backgrounds.  Yet, when I gave an initial presentation on my work to the community, my African American friends were troubled.  Norah Simonson, a member of the Mother Board at Mt. Zion Baptist Church, said,  “we are not just ‘myths.’ We are real families..families who were torn apart, but who endured.” She and others insisted that it was insufficient for me just to trace the “myths’: I needed, as well, to trace the long-lost descendants of Miss Kitty, to find out what had become of her three children, who had been taken as slaves away from Georgia by Bishop Andrew after their mother’s death in 1851. “We have been praying on those children all these years,” the African American community historian Emogene Williams told me.  “Did they come to a safe harbor? Find those descendants, and bring them back to us.”

After several years of archival research, I succeeded in tracing Miss Kitty’s children. Her daughter Emma settled in Pine Bluff, Arkansas, where her son became a prominent dentist. Her second son, Russell Nathan Boyd, became a librarian in the US Department of State in Washington D.C., where he served as senior trustee in Rev. Francis Grimke’s 15th Street Presbyterian Church. In tracing the remarkable story of Russell Nathan and his family, I found myself re-discovering African American Washington D.C. a city I had both known and not known.

Emma and Russell Nathan left no living descendants. I despaired of ever fulfilling the community’s request to ‘bring the children home.” Luckily, two years ago, Freedmen Bank records led me to Miss Kitty’s eldest son, Alford Boyd, who escaped from slavery in Alabama, made his way to Iowa, and become an ordained minister in the African Methodist Episcopal (AME) Church.  My wife Ellen and I travelled through the Midwest, locating the congregations he had pastored, and were finally led to Allen Chapel AME in Rockford, IL, where Rev. Boyd’s 84 year old great-grandson, Lee Caldwell, was senior trustee. Meeting Mr. Caldwell was one of the great thrills of my life, soon equaled by meeting his adult daughters, Darcel and Cynthia Caldwell in Philadelphia. Together, we traced the Boyd line from the 1790s to the present and determined that Miss Kitty had most likely referred to herself as “Catherine Boyd”

Following their father’s death in November 2010, the Caldwell sisters traveled to Georgia in February 2011 to attend a conference at Emory on slavery and universities. Their visit was eased by the Emory Board of Trustees’ statement of regret for the university’s historical entwinement with slavery.  Cynthia and Darcel were warmly greeted by the Emory and Newton County communities. The congregation of Grace United Methodist Church, where many descendants of the early enslaved families of Emory still worship, partnered with artist Lynn Marshall Linnemeier to create a beautiful large memory quilt to “welcome home” the long lost descendants.  Into this Yoruba-inspired work they sewed family photographs, reuniting through art families long torn asunder through slavery and Jim Crow.

In December 2011, Emory University officially celebrated its 175th anniversary by naming its  175 leading “history makers.” One of the 175, we were thrilled to learn, was Miss Kitty/Catherine Boyd herself.  The Caldwell sisters were brought down to Emory and Darcel was given a university medal in remembrance of her ancestral mother.  At the award luncheon, a white great grandson of Bishop Andrew warmly greeted  Darcel. He explained he’d been reading my book. “You know,” he said with a smile, “We might be cousins!”

Earlier that Fall, on Sunday, October 23, the Oxford City Council moved to honor the family as well, commissioning a headstone that used the full appellation of Catherine “Miss Kitty” Andrew Boyd, and performing a beautiful multiracial dedication ceremony in the heart of the long-contested cemetery.  Darcel and Cynthia were joined by Emory and Oxford city officials and by many other local whites and African Americans in a joyous celebration of reflection and reconciliation. One week after the dedication of the Dr. Martin Luther King Memorial in Washington D.C., this grassroots dedication, in a small town Georgia cemetery signaled in a quiet way that for all the great work that remains to be done, our nation is taking significant steps towards healing the vast wounds of slavery and its legacies.

Auslander, M. (2012, January 17). Remembrance in the Cemetery: In Search of “The Accidental Slaveowner”. BlackPast.org. https://www.blackpast.org/african-american-history/remembrance-cemetery-search-accidental-slaveowner/

The above material is adopted from  Mark Auslander’s new book, The
Accidental Slaveowner: Revisiting a Myth of Race and Finding and
American Family