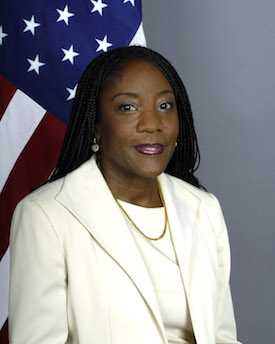 Frankie Annette Reed is a career Foreign Service officer who has held a variety of diplomatic postings in Europe, Africa, and Pacific Island nations.   Between 2011 and 2013, she served as concurrent Ambassador to the Republic of the Fiji Islands, the Republic of Nauru, the Kingdom of Tonga, Tuvalu, and the Republic of Kiribati.  Reed was also promoted in 2011 to her current standing as a Minister-Counselor within the Senior Foreign Service.

A Baltimore, Maryland native, Reed earned a Bachelor of Arts in journalism at Howard University in Washington, D.C. in 1975 and a Juris Doctor from the University of California, Berkeley three years later.  She credited her experiences as Editor-in-Chief of Howard University’s student newspaper and a 1978 summer program in international law through the International Institute of Human Rights in Strasbourg, France as shaping her interest in the diplomatic service.  Reed worked briefly as a journalist and as a lawyer after passing the California bar exam in 1979 before entering the Peace Corps in 1981.  This proved a foundation for her career in diplomacy and when Reed returned from Peace Corps stations in Senegal and Samoa in 1983, she joined the U.S. Foreign Service.

Reed began her diplomatic career as a desk officer in the U.S. State Department’s Bureaus of African Americans and Western Hemispheric Affairs before becoming a political officer serving in U.S. embassies in Nairobi, Kenya and Yaoundé, Cameroon.  In 1996-1997, Reed earned a Pearson Fellowship, a prestigious career opportunity intended to build the political experience and skills of career Foreign Service workers.  Reed served her fellowship with U.S. Representative Howard Berman (D, CA), a member of the House’s Judiciary and International Relations Committees.  By 1998, Reed returned overseas, working as a Political Section Chief in Dakar, Senegal before being reassigned as Deputy Chief of Mission in Apia, Samoa from 1999 to 2002 and in Conakry, Guinea from 2003 to 2005.  In 2005, she was appointed to be the Consul General and Deputy U.S. Observer to the Council of Europe and the European Court of Human Rights in Strasbourg.

After working abroad for a decade, Reed returned to the United States in 2008 to recruit new Foreign Service workers and promote the U.S. State Department as a Diplomat-in-Residence at the University of California, Berkeley.  She next moved to the U.S. Department of State’s Bureau of East Asian and Pacific Affairs, serving as a Deputy Assistant Secretary focused in the area of relations with Australia, New Zealand, and the Pacific Island nations.

After President Barack Obama nominated Reed as concurrent Ambassador to the Republic of the Fiji Islands, the Republic of Nauru, the Kingdom of Tonga, Tuvalu, and the Republic of Kiribati in 2011, she testified about the complex historic and contemporary U.S. ties to these island nations, spread across a vast stretch of the Pacific Ocean, before members of the U.S. Senate.  Once confirmed, Ambassador Reed worked to promote democratic elections in Fiji, then ruled by a military junta since 2006.  Fijian elections were held in 2014, as Reed finished her three-year posting in the nation.  She also worked with Fijians and other Pacific Islanders to limit the effects of climate change and on combatting HIV/AIDS in the region.  Reed continues her career in the U.S. Foreign Service. She is currently stationed as Consul General in Melbourne, Australia.

“An Interview with Frankie A. Reed, U.S. Ambassador to Fiji,”
http://thepolitic.org/an-interview-with-frankie-a-reed-u-s-ambassador-to-fiji/
); “Howard Alumna Reed Sworn in as Ambassador to Fiji,”
http://www.howard.edu/newsroom/releases/2011/20110929HowardAlumnaReedSworninasAmbassadortoFiji.htm;
and “U.S. Consul General Frankie A. Reed,”
http://melbourne.usconsulate.gov/consul_general.html.