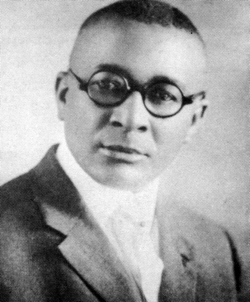 Emmett B. Reed
Fair use image

Emmett B. Reed was born in Virginia but moved at age 16 to work in the coal mines of British Columbia.  Within 10 years he had become a licensed minister, and in 1919 was called to pastor Calvary Baptist Church of Spokane, beginning a tenure that would last until his death in 1961.  Years later church members recalled his coming: “The spiritual and financial chaos were soon a matter of history… Buildings, members, and friends throughout the community are products of his prayer.  Rev. Reed understood the need for blacks to unite.”  Reed did indeed understand the need for racial unity.  He assisted in the founding of the Spokane NAACP branch in 1923.  He became the chapter’s first president, and also joined the Spokane County Colored Republican Club.  Reed was known for visiting Spokane stores and restaurants that posted “No Colored Patronage Solicited” signs and demanding removal of the signs.

Along with his political involvement, Rev. Reed remained equally focused on “becoming a better minister and developing a more religious atmosphere” at Calvary Church.  Dr. Ruth Nichols, member of a pioneering black family in Spokane, related, “The church experience was an immeasurably important part of my life as a child and young adult… Reverend Reed as a man was ahead of his time in understanding the needs of Afro-American children.”  Reed faithfully served the church for 42 years, until his death in 1961.  It was said that in response to his constant cry for unity, Calvary Church moved the Spokane community into the “Era of Black Equality.”  Even today, the church continues this legacy.