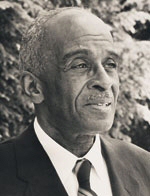 James Thomas Saunders Redding was born in Wilmington, Delaware on October 13, 1906 to Lewis Alfred Redding and Mary Ann Holmes.  Redding earned a bachelor of philosophy (Ph.B.) in 1928 and later a master of arts (M.A.) in 1932 from Brown University.  Redding also earned the right to Phi Beta Kappa honors but the racial climate of the time did not permit him to receive the distinction until 1943.  He later attended Columbia’s graduate school from 1933-34.

Redding’s career as an educator included both historically black and white colleges and universities.  John Hope hired Redding as an instructor at Morehouse College (1928-31).  He later taught at Louisville Municipal College (1934-36), Southern University, Baton Rouge (1936-38), and served as head of the English Department; Elizabeth City State College (1938-43).  He worked at Hampton Institute (1943-55), as professor of literature and creative writing. He was a member of the faculty at George Washington University (1968-69), and the first African American to hold the rank of professor in the College of Arts & Sciences and the first to hold an endowed chair at Cornell University (1970).  He was a Guggenheim Fellow (1944-45, 1959-60).

Redding made two significant contributions to African American thought. His criticism of Black Nationalism in On Being Negro in America (1951) illustrated the complications and perils of trying to create the social and economic machinery required to build a “racial island,” as he understood that African Americans were dependent upon the material resources of the United States.  Secondly, he reexamined W.E.B. DuBois’s concept of the double consciousness of black life in America.  Double-consciousness, as written by DuBois and others, was held to negatively impact the psychological health of blacks. Redding, however, attributed much of the hostility and anger within the black community as “frustrated pride.”

Redding who was a member of Sigma Pi Phi fraternity, married Esther Elizabeth James and had two children from this union, Conway Holmes and Lewis Alfred II.  J. Saunders Redding died in Ithaca, New York on March 2, 1988.  He was 81 at the time of his death.