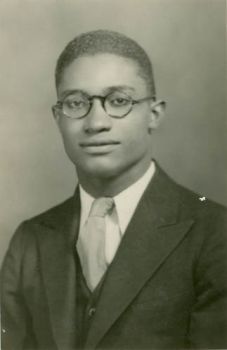 During his life historian Lawrence Dunbar Reddick used his scholarly expertise to fight for civil rights.  Born in Jacksonville, Florida, on March 3, 1910, Reddick received his Bachelor’s and Master’s in history from Fisk University in 1932 and 1933, respectively.  He went to the University of Chicago to earn his PhD in history, which he completed in 1939.  That same year he married Ella Ruth Thomas to whom he was married for 57 years.

Before Reddick received his PhD, he had begun his career as a historian and activist.  In 1934 he led the Works Project Administration slave narratives project at Kentucky State College which collected 250 slave testimonies and interviews by other former slaves in Kentucky and Indiana.  By 1936 Reddick was hired at Dillard University in New Orleans.

Throughout his career Reddick was outspokenly critical of the stereotypical image of African Americans portrayed not only in media, but also in textbooks.  In his article “Racial Attitudes in American History Textbooks,” which appeared in the Journal of Negro History in 1934, Reddick argued that the accurate portrayal of African American history was crucial for the race’s advancement.  Included in this, Reddick claimed, was the history of colored people across the world.  As a supporter of the anti-colonial struggles and of pan-Africanism, Reddick urged that the history of all persons of African ancestry be collected, recorded, and embraced.

This vision would lead him to become the second curator at the Schomburg Collection of Negro Literature (now called the Schomburg Center for Research in Black Culture) in New York’s Harlem in 1939.  During his time as curator Reddick helped to expand and develop the collection, making it one of the most comprehensive collections in the world.

Reddick left the position in 1948 to become chief librarian and a professor of history at Atlanta University.  During his employment there, Reddick became involved with the Civil Rights Movement where he recorded the developments and became a confidant of Martin Luther King, Jr.  He was a member of the board of directors of the Southern Christian Leadership Conference (SCLC) and accompanied King and his wife to India in February 1959, where they met with Prime Minister Jawaharlal Nehru to discuss Gandhi’s philosophy of nonviolent resistance.

Reddick’s involvement in the Civil Rights Movement led to his firing by Atlanta University because he was suspected of being a Communist.  King defended Reddick, but his efforts were in vain.  For the rest of his life Reddick held various positions at multiple schools, including Coppin State Teacher’s College in Baltimore, Temple University in Philadelphia, Harvard University, and finally Dillard University once again.  Reddick retired in 1987 and died on August 2, 1995 in New Orleans after a lifetime dedicated to preserving African American history, to altering the way many people viewed African American history, and to fighting for the rights of African Americans.