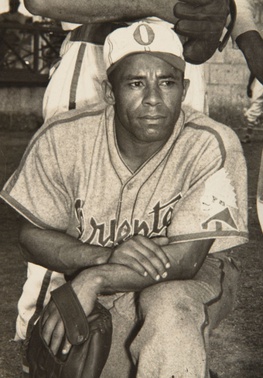 Ray (Raymond) Emmitt Dandridge was a third baseman in the Negro Baseball Leagues. Dandridge was born on August 31, 1913 to Archie and Alberta Thompson Dandridge in Richmond, Virginia. Dandridge’s early childhood included playing baseball, football, and boxing. Dandridge had to quit playing football after suffering a leg injury and he began to focus on playing baseball. Dandridge attended George Mason Elementary School in Richmond until his family moved to Buffalo, New York before returning to Richmond. Dandridge played locally for local baseball teams around Richmond’s Church Hill District, but he dropped out of school after the ninth grade. He would later attend vocational classes part-time at Elm High School in Richmond, Virginia.

Dandridge was “discovered” by Candy Jim Taylor, manager of the Detroit Stars. In 1933, Dandridge signed to play for the Stars but the following year he joined the Newark (New Jersey) Dodgers who later became the Newark Eagles. Dandridge played with the Eagles from 1934 to 1938. During his time playing for the team, he was part of a legendary “Million Dollar” infield that included Dick Seay, Mule Suttles, and Willie Wells. In 1939, Dandridge would leave the stars because he felt badly underpaid. He joined the Mexican League, playing for the Azules de Veracruz where he played from 1940 to 1943 and again from 1945 to 1948. He returned to the Eagles for one year (1944) and in 1949 became a manager for the New York Cubans. Later in the season he joined the Minneapolis Millers and remained with them until 1952. He then had a series of one-year stints with the Sacramento Solons (1953), Oakland Oaks (1954), and Bismarck Barons (1955). During his playing year Dandridge was a three-time All-Star (1935, 1937, and 1944).

Dandridge retired from professional baseball in 1955 at the age of 42. After retiring he moved to Newark, New Jersey where worked as a baseball scout for the New York (later San Francisco) Giants. He also ran the John F. Kennedy Recreation center in Newark, New Jersey.

On July 10, 1966, Ray Dandridge at the age of 53, married Henrietta Dandridge. On August 14, 1980, the Newark City Council honored Dandridge with a resolution thanking him for his work with the city’s children. In 1985, a ball diamond in Newark’s Westside was renamed the Raymond E. Dandridge Sr. baseball field. Two years later Dandridge was elected to the Baseball Hall of Fame.

Ray Emmett Dandridge died on February 12, 1994 from prostate cancer in Palm Bay, Florida at the age of 80. In 1996, Dandridge was posthumously elected to the New Jersey Hall of Fame. Dandridge’s nephew, Brad Dandridge, carried on the family baseball legacy, playing for the Los Angeles Dodgers from 1993 to 1998.