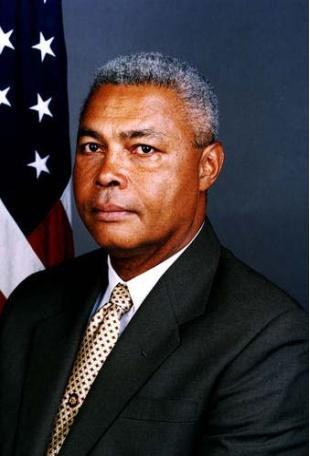 Ambassador Charles Aaron Ray was born in Center, Texas in 1945. He earned his Bachelor’s degree in 1972 from Benedictine College in Atchinson, Kansas, and his Master’s of Science from the University of Southern California in Los Angeles and a Master’s of Science in National Security Strategy from the National Defense University in Washington, D.C.

Ray joined the U.S. Army in 1962, and earned a commission of second lieutenant in 1965. In 1982, he retired from the military with the rank of major, after having served for 20 years. While in military service, Ray received two Bronze Star medals and the Armed Forces Humanitarian Service Award. During that time he did tours of duty in Vietnam, Germany, Okinawa (in Japan), and South Korea.

In 1983, one year after retirement, Ray joined the U.S. Foreign Service. His first State Department assignment was in its Political and Military Affairs Bureau.  His first overseas assignment was in the U.S. Consulate General Offices in Guangzhou and Shenyang, China.  Ray’s overseas assignments have also included serving as an administrative officer in Thailand and deputy chief of mission at the U.S. Embassy in Freetown, Sierra Leone. In 1998, he became the first U.S. Consul General in Ho Chi Minh City in Vietnam.

On November 15, 2002, President George W. Bush nominated Ray to his first ambassadorship, Cambodia.  After confirmation by the U.S. Senate, Ray arrived in Phnom Penh, the capital of Cambodia, on January 4, 2003 and remained there until July 11, 2005. While in Cambodia, Ray took an active interest in the problem of human trafficking, and cultural preservation. He tried to help develop a positive relationship between the government, the people, and the United States after years of a brutal Communist dictatorship led by the Khmer Rouge from August 1975 to January 1979, and the Vietnamese occupation of the country for the next decade.

Upon leaving Cambodia, Ray served as diplomat-in-residence at the University of Houston for one year, where he recruited students who were interested in foreign policy and service.  In September 2006 he was appointed as Deputy Assistant Secretary of Defense for POW/Missing Personnel Affairs. Here he reported to Secretaries of Defense Donald Rumsfeld and Robert Gates on policy matters related to missing military personnel.  He also helped create policies and procedures for determining the status of all Americans missing in action.

On August 5, 2009, President Barack Obama nominated Ray to his second ambassadorship to Zimbabwe. After Senate confirmation, he arrived in the capital, Harare, in October 2009 and served there until the summer of 2012.

Ray began writing as a teenager and over the years he has published a number of books in what he calls the Buffalo Soldier series.  He is also the author of Things I Learned from My Grandmother about Leadership and Life (2008) and Taking Charge: Effective Leadership in the Twenty-First Century (2009). He has also produced photography and art for publications such as Ebony, the Foreign Service Journal, and Newsweek.  Proficient in Vietnamese and Thai, Ray also knows German, Korean, and French.

Charles Ray retired from public service on September 1, 2012 at the age of 67.  He now devotes his time to his writing, art, photography, and public speaking on leadership and international affairs.