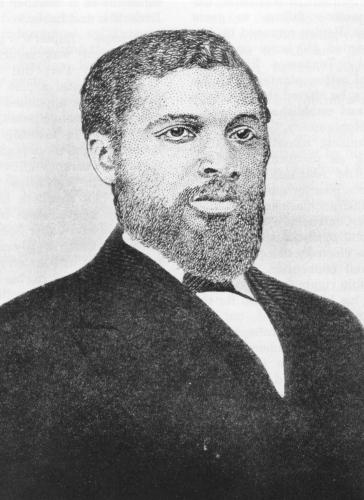 James Thomas Rapier was a Republican representative from the state of Alabama elected to the 43rd United States Congress. Rapier was born on November 13, 1837 in Florence, Alabama and attended high school in Nashville, Tennessee. In 1856 at the age of 19 he traveled to attend the King School in Buxton, Ontario, Canada, an experimental black community. There, along with his education he experienced a religious conversion and decided to devote his life to helping southern blacks. Rapier also attended the University of Glasgow and Franklin College in Nashville before receiving a teaching certificate in 1863.

Rapier moved to Maury County, Tennessee and in 1865 started campaigning for African American suffrage. He delivered the keynote address at the Tennessee Negro Suffrage Convention in Nashville that same year. When the movement saw no success he took up cotton farming in his home town of Florence, Alabama and became successful.

After the U.S. Congress passed the Reconstruction Acts in 1867, Rapier was elected a delegate to the first Republican state convention in Montgomery, Alabama and helped draft the Party’s platform. Rapier adopted a moderate political stance, which earned him respect from many Republicans. To some white southern Democrats, however, his engagement in politics at all was considered unacceptable.  In 1868 Rapier was driven from his home by the Ku Klux Klan and remained in seclusion for almost a year.

In 1870 he resumed his public life when he became the Republican nominee to be Secretary of State in Alabama.  Rapier was the first African American to run for statewide office, but was defeated. In 1871 he was appointed Assessor of Internal Revenue in the Montgomery district.

Rapier meanwhile sought to build a political base of support.  He joined the emerging black labor union movement and attended three national Negro Labor Conventions between 1869 and 1872. In 1870 he was elected vice president of the National Negro Labor Union and started the Southern branch of the NNLU in Alabama – becoming its first president and executive chairman.

In 1872 Rapier became the Republican Party nominee for Congress from northern Alabama, and after an intense campaign, won a huge victory. While in Congress he pushed through a bill to make Montgomery a port of delivery (which turned out to be an enormous boost for the city’s economy), and supported civil rights, education, and anti-violence legislation as well as the 1875 Civil Rights Law.

Democrats, however, regained control of the state and Rapier was defeated in his 1874 reelection bid. He ran again in 1876 but lost. Rapier remained active in politics after Reconstruction.  He eventually became disenchanted with the treatment of African Americans in the region.  By 1879 Rapier was one of the leaders of the Negro emigration movement that encouraged African Americans to leave the South. He purchased land in Kansas for black settlement and lectured extensively on the advantages of black settlement in the West.  On May 31, 1883 James Thomas Rapier died in Montgomery, Alabama of a longtime illness, pulmonary tuberculosis, at the age of 45.