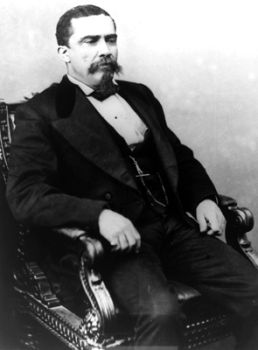 Alonzo Jacob Ransier, an African American Republican from South Carolina, held a series of political posts during the Reconstruction era.  Ransier was born a free black man in Charleston in 1834.  Little is known of his childhood and early education.  At the end of the Civil War he worked as a shipping clerk.  In 1865, at the age of 31, he was appointed state registrar of elections.  The following year, 1866, Ransier attended South Carolina’s first Republican convention and two years later was elected to the Constitutional Convention which established the state’s first racially integrated government.  Ransier served in that government when he was elected to the South Carolina House of Representatives in 1868.  In 1870 Ransier was elected Lieutenant Governor of South Carolina.  Ransier was a delegate at the 1872 Republican National Convention in Philadelphia.  That same year he was elected to the Forty-Third United States Congress from the 2nd Congressional District.

Ransier was actively committed to the cause of equality for the African American citizens of South Carolina and the nation.  While in Congress he fought for a civil rights bill, supported strong tariff laws, opposed arbitrary salary increases for federal officials, advocated term limits for politicians and petitioned for funds to improve the maintenance of Charleston harbor.

Ransier was defeated by white Independent Republican Edmund W.M. Mackey in his reelection bid.  Afterwards, he returned to Charleston and worked for the United States Internal Revenue Service and later for the Charleston municipal government.  Alonzo Ransier died in Charleston on August 17, 1882.