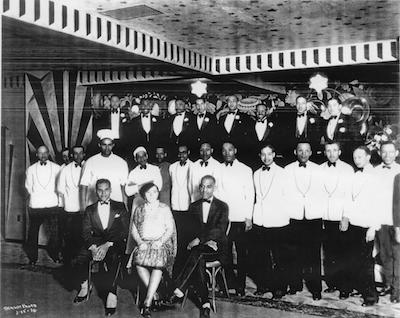 San Diego businessman and community leader George Ramsey was born in Pasadena, California, one of eight children of George S. Ramsey, a railroad porter and barber, and Eva M. Ramsey. Most sources say that he arrived in San Diego in 1913 as the valet of a prominent amusement park developer, but Ramsey himself recalled selling newspapers on the streets of the city in 1904. At one time a stowaway and hobo, among other jobs he claimed to have tried as an energetic young man were ranch hand, boxing manager, bootblack, and salesman.

By 1916 Ramsey resided in downtown San Diego and had started a career managing bars, cafes, hotels, and boarding houses that catered mainly to African Americans, sometimes in partnership with other businesspersons like Anna Brown, a black woman with whom he controlled the Hotel Yesmar (Ramsey spelled backwards, later known as the Hotel Anita). During the early 1920s, he was prosperous enough to indulge his passion for breeding and racing horses and betting on them at Tijuana, Mexico’s Caliente Race Track.

Most successful and significant was Ramsey’s partnership with the married couple Robert and Mabel Rowe, a white male and an assumed to be light-skinned black female, which led to the construction of the forty-five-room Douglas Hotel in 1924 at the corner of 2nd Avenue and Market Street in the downtown district. Six years later, the hotel’s Creole Palace nightclub opened with a spacious ballroom and stage shows that featured a risqué “black and tan” chorus line, jazz, blues, boogie-woogie band performances, and singers who thrilled the nightclub’s racially mixed clientele. Also on the premises was a café, bar, clothing store, laundry, card room, billiard hall, and barbershop.

As its reputation spread as the premier black entertainment venue on the Pacific coast, the hotel-nightclub tandem earned the appellation “Harlem of the West,” and Ramsey—arguably the most prominent and influential African American in the city—was hailed the unofficial “Black Mayor of San Diego.” More than an attractive resting place and chic cabaret, this was the most visible business establishment that blacks in the region could point to with considerable pride. Visiting celebrities included boxer Joe Louis, Congressman Oscar DePriest, musicians Louis Armstrong and Duke Ellington, and vocalists Billie Holiday, Dinah Washington, and the Mills Brothers.

After the failure of his three-year marriage to his first wife, Rena, in 1924, and the death of business partner Robert Rowe, Ramsey married Rowe’s widow, Mabel Rowe, in 1927. The marriage ended in divorce in 1939, but Mabel concentrated on managing the Douglas Hotel until it was sold in 1956, a casualty of competition and, ironically, racial desegregation.

Tall, erect, handsome, suave, and always stylishly dressed, Ramsey demonstrated philanthropy and civic leadership that benefited the black community. A 33rd degree Mason and Shriner, Ramsey was also a member of the NAACP, fundraiser for Bethel Baptist Church, lobbyist for an all-black neighborhood fire station and coastal patrol force, a leader of the black voters’ Douglas League, and a president of the San Diego Negro Taxpayers’ League.

In his latter years, when not in his garden tending to his prize carnations at his “Rancho de Amour” on Martin Avenue, Ramsey wrote a regular column for the California Eagle called “Racing With Ramsey” that covered the horse racing scene at Caliente where he was a public relations representative.

George A. Ramsey died in Mercy Hospital in San Diego on January 20, 1963, and was buried near his home in Mt. Hope Cemetery.  It is believed he was seventy-three years old at the time of his death.